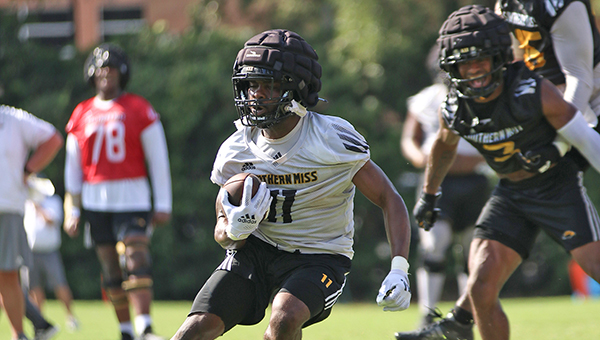 The sophomore from Miami returns for his third season at running back having accumulated 1,509 rushing yards over his Southern Miss career. He’ll see the lion’s share of the team’s carries this season.

Who else, though, is likely to see action in the backfield this fall?

“I have seen a lot of good things out of Janari Dean and Kenyon Clay is talented,” Southern Miss second-year head coach Will Hall said after Tuesday’s training camp practice. “Kenyon has got to learn how to hold on to that football. You get hit harder at Southern Miss than you did at Union (High School).

“But, Janari and Kenyon have really flashed and (Dajon Richard) has been right there as well. At the Super Back spot Rambo (Antavious Willis) has really shown some good things and there are a lot of good things he can do as he continues to progress.”

Dean, from Batesville, is in his first camp with the Golden Eagles after spending the last two seasons on the defensive side at Mississippi State. Clay, from Union, is in his freshman season.

Richard, a sophomore from Patterson, La., finished second on the team in rushing a year ago with 447 yards and ended his first season with the Golden Eagles with a pair of 100-yard performances. He tallied 120 yards on the ground at Louisiana Tech and 107 yards in the finale against Florida International.

As for Willis, a redshirt sophomore from Camden, Miss., he added 97 yards on the ground — all of which came in the final three games of last season as a Super Back — while adding 92 passing yards and one touchdown.

In front of the running backs, Hall has been happy with the progression of his offensive line through the first few days of training camp. Improved depth among the blockers should help bolster the running game as much as the returning ballcarriers.

During the first four days of camp, including two in shoulder pads, the Golden Eagles were  able to utilize three rotation groups to run through repetitions, which is something they were unable to do last year due to low numbers. They have a full complement of 85 scholarship players this season.

“We have three rotations of scholarship guys, too,” Hall said. “Not just bodies. We recruited really well. Now we are young, but we are young and talented.”