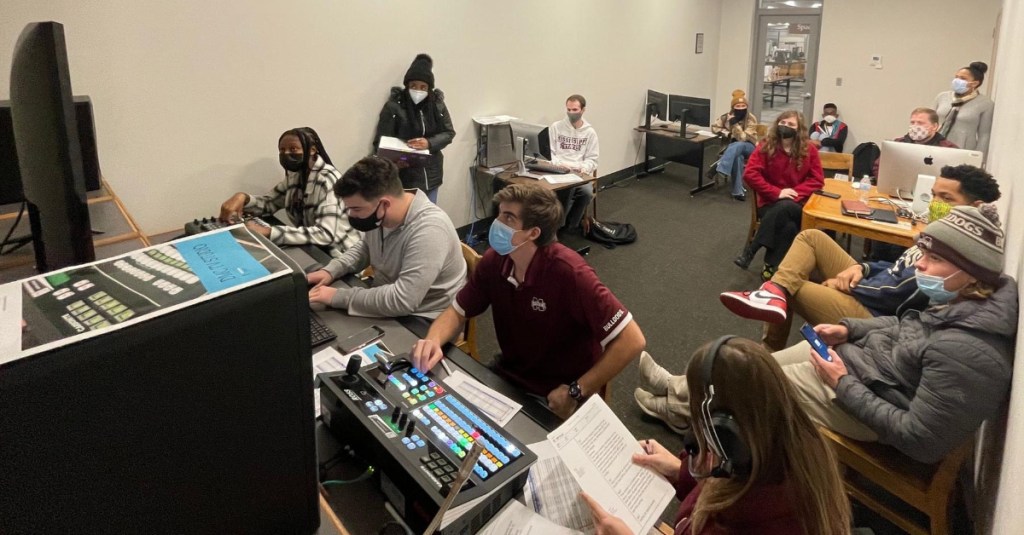 MSU students producing the “Take 30 News” program are being recognized for excellence in television journalism for their work during the spring semester. (Photo submitted)

“Take 30 News” — produced entirely by MSU students — received the top prize from the NATAS Southeast Chapter for their “pursuit of excellence in television journalism” displayed in a production from this spring.

“How exciting for the students and what a testament to their hard work,” said Chris Misun, “Take 30 News” co-advisor and MSU broadcast instructor in the Department of Communication. “We are beyond proud of their progress throughout the semester to earn this achievement.”

Victoria Baily, an MSU broadcast instructor, is the lead advisor.

Misun added, “As advisors, it is a proud moment to observe and guide the students through the challenging landscape of putting all the different components together to produce a quality newscast that is award-worthy. I cannot say enough how rewarding it is to be in the room with these amazing students and see their hard work recognized on such a grand stage.”

Terry Likes, professor and head of the Department of Communication, said, “Given this is the same organization that awards Southeast Emmy’s to media professionals, this accomplishment offers the external validation which shows our faculty are achieving best practices in teaching. The volume of awards and accolades our students have received in recent years is a testament to the quality of instruction of our faculty.”

NATAS is a service organization dedicated to the advancement of the arts and sciences of television and the promotion of creative leadership for artistic, educational and technical achievements within the television industry. Membership consists of more than 18,000 broadcast and media professionals represented in 19 regional chapters across the U.S.