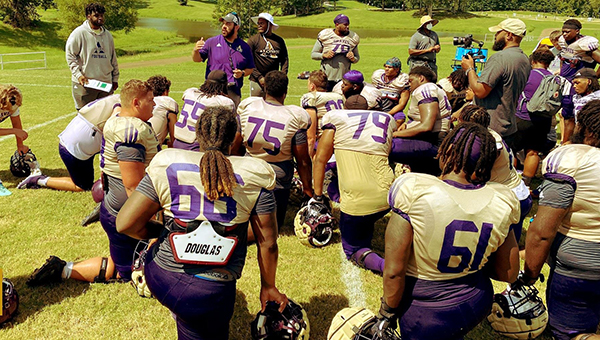 LORMAN — Alcorn State got its first live-action look at its 2022 football team on Saturday.

The Braves held their first scrimmage of training camp, running 79 plays during their ninth official practice. They worked mainly between the 20-yard lines, with several red zone plays mixed in. The special teams units also got work with punt coverage and field goal situations.

“It was a big scrimmage for us to see where we’re at in terms of position-wise and what the team has been taught the last week,” Alcorn head coach Fred McNair said. “I think they came out with great intensity. I saw some good stuff. There will be lots of stuff for each unit to watch on video for the next few days and see how we can progress from there as a team.”

Junior quarterback Aaron Allen, a spring transfer from Louisiana Tech, saw most of the action with the first team offense to start the day.

Unofficially, Allen completed 12 of 21 passes for 125 yards. Meanwhile, sophomore Kole Williams ran the last three series with both the first- and second-team offense, unofficially rushing for about 50 yards.

In all, six different receivers caught passes during the scrimmage from the trio of quarterbacks to see action under center.

“Today, it was a good day in all phases — offense, defense and special teams,” Duffey said. “We really got after it, especially the defense, in giving us some good looks on the offensive side of the ball. Of course, we have some things to work on. But overall, as a first scrimmage, I thought it was a successful day.”

The defense was headlined by redshirt senior defensive back Keyron Kinsler Jr.. He only worked on eight plays, but was instrumental as a vocal senior leader for a group that is considered to be one of the strongest units on this year’s team.

“The scrimmage was a good outlook on how far we’ve come through the first week or so of camp, and where we are in terms of putting all the pieces together,” Kinsler said. “We’ve been able to fly to the ball in camp, but it’s really all about doing the little things right. It’s about making sure everyone executes, and that’s what we’ve been trying to harp upon as a defensive unit.”

Alcorn State will continue its training camp schedule next week. A date and time for the team’s second scrimmage will be announced later next week as well.

The season opener is Sept. 3, at home at 6 p.m. against Stephen F. Austin.

“Going into next week with more practices, I’m looking forward to the guys getting even better,” McNair said. “I want to see more consistency; not as many missed assignments; not making the same mistakes mentally. We have to continue growing as a team. I keep saying it ‘together we rise,’ and I can’t stress it enough that we’re in this together as a team. We have to keep this thing plugged in and play together.”