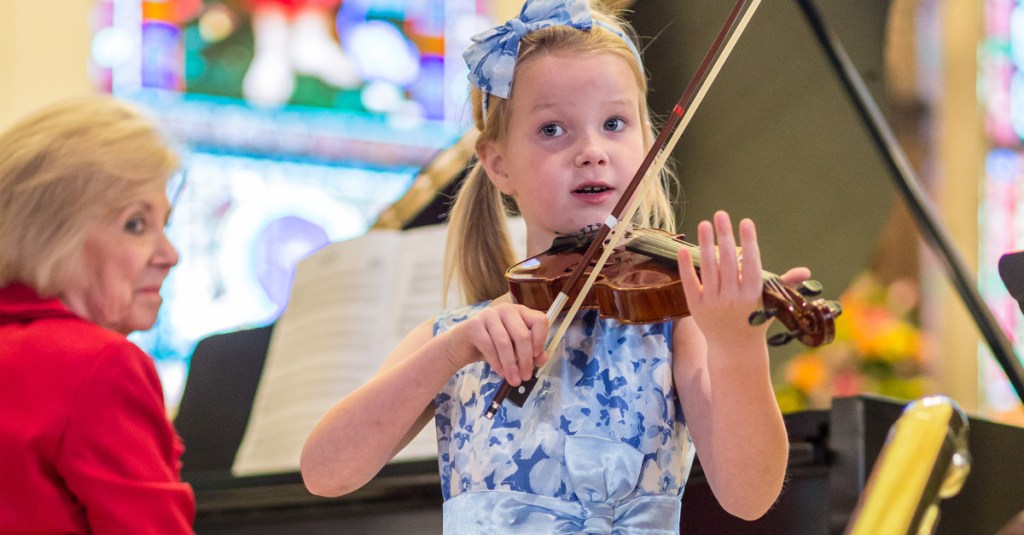 Addison Bednar performs during the 2016 Church of the Holy Trinity Conservatory of Fine Arts recital. Bednar is accompanied by Dorothy Brasfield. After being closed for two years, due to the pandemic, the conservatory will resume classes this fall. (Photo Submitted)

What all started with one piano teacher grew into the Church of the Holy Trinity Conservatory of Fine Arts — an arts program that offers people both young and old the opportunity to grow their skills and enjoy music.

The conservatory, like many other organizations, shuttered during the COVID-19 pandemic. But now after a two-year hiatus, they will be resuming classes for the fall.

The idea of starting a conservatory began when Dorothy Brasfield, the long-time organist at the Church of the Holy Trinity and administrative director of the conservatory was asked if she could teach piano lessons.

This was around 2000, Brasfield said, and because her home was in Edwards, she felt like the only place she could offer lessons was at the church. Brasfield said she asked if that would be acceptable, and the answer was yes.

“The church said, absolutely it was fine, so I started giving lessons in the choir room,” she said.

When the Rev. Michael Nations became the rector at Holy Trinity, Brasfield said he became interested in expanding on what Brasfield was doing.

“He (Nations) was very supportive of the arts, whether it was orchestra or theatre or choir,” Brasfield said.

Therefore, Brasfield and Nations began talking about establishing some kind of school for the arts.

The idea became a reality in 2006 when it first opened in a small house on Monroe Street. Brasfield said it wasn’t long — “a year or a year and a half” that it was evident the Monroe Street house was not big enough.

In the search for a bigger space, the old Vicksburg Post building, which is on South Street and adjacent to Holy Trinity, was ultimately purchased. There, the conservatory was able to grow and expand.

When first moving into the South Street facility, Brasfield said, the conservatory started out with instruction in theater, voice and strings, in addition to piano lessons. Gradually, she said, offerings were increased to include visual art and photography.

“There was a need, and we filled the need in the community,” Brasfield said.

But in March 2020, the conservatory shut its doors.

“We closed down because of COVID and it’s taken us this long to feel like we were safe to go back in small studios and have exposure in a closer area than we had been able to do,” Brasfield said about the conservatory reopening for the fall.

This fall, the Church of the Holy Trinity Conservatory of Fine Arts will offer private and class lessons for ages 5 to 85. Classes offered will include piano/organ; voice; woodwind/flute; brass; percussion; strings and visual arts.

“We have private lessons, and, in some instances, we develop group class lessons,” Brasfield said. “At one time we had four or five older ladies that were playing the cello. They would come late on Thursday afternoon, and we had to run them out at night because they were having such a good time.”

In the past, Brasfield said, the conservatory had also developed its own “little orchestra.”

Also at the conservatory, Brasfield said recitals and masterclasses with guest artists are held twice a year.