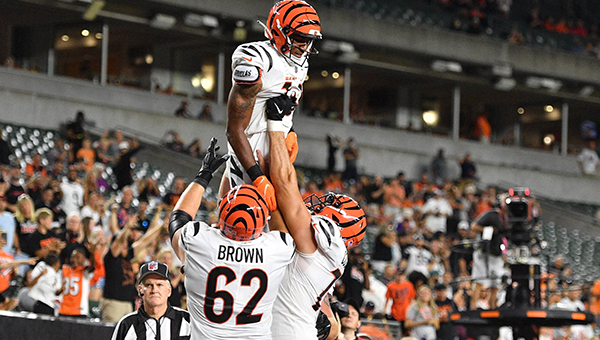 Cincinnati Bengals offensive lineman and Vicksburg native Ben Brown (62) celebrates a touchdown with his teammates during a preseason game against the Arizona Cardinals last Friday. Brown suffered a biceps injury in the game and on Monday the Bengals placed him on season-ending injured reserve. (Ryan Meyer/Courtesy of the Cincinnati Bengals)

Ben Brown’s rookie season with the Cincinnati Bengals has come to an end after one preseason game.

The Bengals placed the offensive lineman on the reserve/injured list with a biceps injury suffered late in the fourth quarter of the preseason opener against the Arizona Cardinals.

The Vicksburg native had reportedly been seen wearing a sling in the team’s facility over the weekend, and on Monday was placed on season-ending IR. It was not immediately clear how his future status with the Bengals would be affected.

It’s the second year in a row that Brown has suffered a season-ending injury, after he earned a reputation as one of the most durable players on Ole Miss’ roster.

Brown started 40 games in a row for the Rebels until he tore his biceps tendon in his left arm in an October 2021 game at Tennessee. Coincidentally, that injury also occurred late in the fourth quarter.

He signed with the Bengals as an undrafted free agent in May and was trying to make the roster as a backup lineman. Brown also played guard in college, and his versatility was considered an asset.

Brown played guard and center in the second half of the 36-23 loss to the Cardinals on Friday and had gotten some positive buzz going during offseason workouts and the early part of training camp.