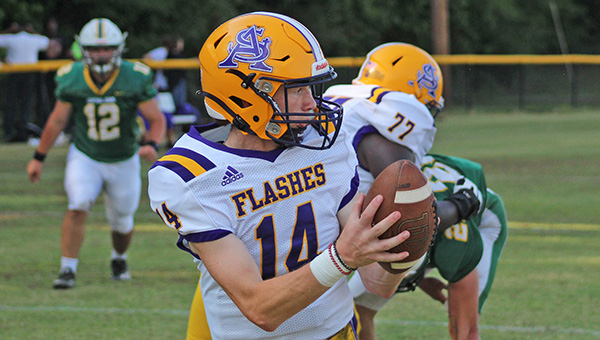 The St. Aloysius Flashes are trying to crawl out from under the weight of history. They’re out to avenge a frustrating loss from last year while getting their feet under them in this one. And, in the MAIS, it’s never too early to think about playoff scenarios.

The Flashes begin the 2022 football season Friday night at home, against Park Place Christian Academy, with much more than just a 1-0 record on the line.

“Beating a 5A school would give us a massive amount of power points from the beginning,” St. Al coach Bubba Nettles said. “It would also be nice to get an opening day victory because we haven’t done it in about 15 years.”

Nettles did not shy away from speaking about his desire to end a long and strange losing streak. St. Al has not won a season opener since it beat Cathedral in 2006.

The streak has persisted for 15 years, under five different coaches, although a loss to Hartfield in 2020 was later flipped to a forfeit victory because Hartfield used an ineligible player.

Nettles added his mark to it last season when St. Al lost 40-26 to Park Place.

“We were talking about it the other day and I was completely shocked. I thought it was only about eight years because of those great teams they had here then,” Nettles said, referring to the St. Al teams that reached the MHSAA Class 1A semifinals in 2013 and the 1A championship game in 2014. “I am just as much a part of that unfortunate streak as any other coach, and we are preparing to end that streak Friday, I can tell you that.”

Ending it would also avenge a loss that Nettles called the most disappointing on a 2-8 record in 2021. The teams started the game with three consecutive kickoff return touchdowns ­­— two by Park Place and one by St. Al ­— before Park Place rolled to a 40-18 lead at halftime.

“Out of all of them, that one hurt the most, because it was my opener and I wanted it to happen. The two kickoff returns set the tone in the first half and we never recovered,” Nettles said.

The Flashes seem to be in a good position to both take their measure of revenge and put the season-opener streak to bed. They have seven starters returning on either side of the ball, while Park Place was ravaged by graduation. The Crusaders only have 21 players listed on their preseason roster.

St. Al played East Rankin to a scoreless tie and lost 6-0 to Central Hinds ­in a preseason jamboree last week. The one touchdown they allowed followed a turnover deep in their own end.

“We are pretty stout defensively,” Nettles said. “They understand the system and know it. We pretty much pitched a shutout in the jamboree. Nobody put together a drive on us. That was a big deal for us.”

Nettles said the lack of points on offense came largely from misfiring on a few open pass attempts — either overthrows or drops. St. Al is breaking in two new quarterbacks this season, John David Liggett and Carson Smith.

“When I got on the bus I was very upset. By the time we got back to school I had calmed down,” Nettles said. “I realized it was our first live looks since spring and I get to coach and correct — which is the greatest job in the world.”

Winning the opener would give more than just an emotional boost to the Flashes. Their 10-game schedule includes five teams — two of them district opponents — that reached the MAIS semifinals in their respective classifications last season.

While Nettles expects the Flashes to win more than the two games they did last season, he also admits that victories could be hard to come by against such a brutally difficult schedule and beating struggling opponents like Park Place becomes even more important.

Park Place is also a Class 5A school, which provides a bonus in the MAIS power points formula that determines playoff seeding and wild card berths.

“The back half of the schedule is murderer’s row, so getting as many victories as we can early is important,” Nettles said. “To win this one, get Park Place, get started on the right foot, will dictate how the rest is going to go. It is that important this Friday.”