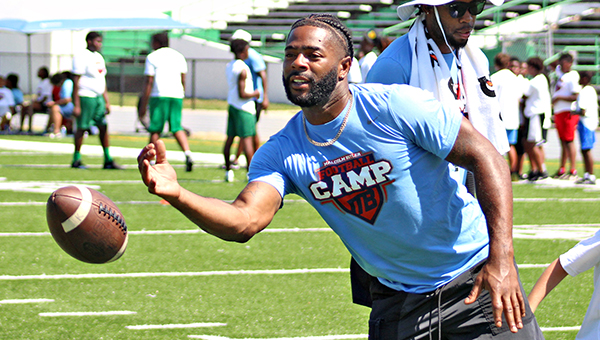 New England Patriots cornerback Malcolm Butler flips the football to a player at his annual football camp in Vicksburg in July. On Tuesday, the Patriots put the Vicksburg native on the injured reserve list with a hip injury. (Ernest Bowker/The Vicksburg Post)

Malcolm Butler’s NFL return will have to wait another year.

The veteran cornerback and Vicksburg native suffered an injury in the New England Patriots’ preseason opener last week, and on Tuesday the team placed him on injured reserve.

The Patriots did not specify what type of injury Butler sustained, but ESPN reported it was a hip injury.
It was not clear when Butler sustained his injury. He played 23 snaps against the New York Giants on Thursday night. He had one tackle and recovered a fumble early in the second quarter, but had not practiced since the game.

The roster move ended Butler’s season, and helped the Patriots trim their roster to 85 players ahead of Tuesday’s NFL deadline. It also raises questions about whether the 32-year-old former Vicksburg High star will play in the NFL again after missing a second full season in a row.

Butler, then with the Arizona Cardinals, sat out the entire 2021 season following a sudden retirement. The Cardinals released him in the offseason. Butler then signed a two-year, $5 million contract with the Patriots, but his roster spot was not guaranteed.

Although he started against the Giants, Butler was listed behind cornerbacks Jalen Mills, Jonathan Jones and Marcus Jones on the depth chart. He was battling for a roster spot with several other veterans and rookies and was considered a depth piece in the team’s secondary.

Butler previously played for the Patriots from 2014-17. He helped the franchise win two Super Bowls — his game-clinching interception in the final minute of Super Bowl XLIX against Seattle is one of the most famous plays in NFL history — and reach a third.

Butler left as a free agent following the 2017 season and signed a lucrative contract with the Tennessee Titans. He played three seasons with them before being cut in a salary cap move in March 2021. He then signed with the Cardinals and played in all three preseason games before his retirement and subsequent comeback.

Butler has played in 100 regular-season games in seven seasons with the Patriots and Titans, and has 17 career interceptions. He was selected to the 2015 Pro Bowl and was a second-team All-Pro in 2016.

This marks the second time this week that a Vicksburg native was placed on season-ending injured reserve by an NFL team. On Monday, Cincinnati Bengals offensive lineman Ben Brown was put on that list after suffering a biceps injury in the team’s preseason opener against Arizona.

Brown, a former St. Aloysius and Ole Miss star, was trying to make the Bengals’ roster as an undrafted free agent.