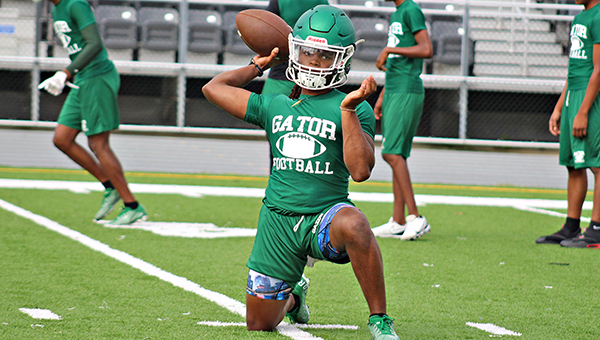 There are high hopes that this could be the best football season at Vicksburg High in 20 or 30 years. The Gators and their fans will get the first glimpse of just how good on Friday night.

Vicksburg will host Natchez in a preseason scrimmage beginning at 6 p.m. at Memorial Stadium. It’s the final tune-up for the regular season, and first chance to see a team loaded with several high-end Division I recruits and 16 returning starters.

“People often say a spring or fall jamboree is not important, but they are very important. Extremely important,” Vicksburg coach Todd McDaniel said. “You want that momentum going into the first week. If you don’t have that momentum and you lose that jamboree, regardless of if it counts it counts in your heart. You want to go out and be able to hit on all cylinders and be prepared for the next Friday.”

The Gators finished 7-5 last season, but are a favorite to win Region 2-5A this year and have their eyes set on a deep playoff run. Defensive end Caleb Bryant has already committed to Utah and defensive back J.D. Kelly to Alcorn State, and cornerback Jaleel Fleming is still sorting through a number of Power 5 conference offers.

The Gators, though, are still a junior-laden team with most of their starters returning for a second or third season.

The massive amount of talent, McDaniel said, has shifted the goals for the scrimmage a bit. With most starting positions settled he’s mainly dialing in on what works best with this particular group.

“The guys have put forth the effort of just trying to be good. We not only want to be good, we want to be great,” McDaniel said. “Still, it’s a process. It’s a brand new football team, brand new year. This team may not be as good, in certain aspects, as the team last year, and this team will be better in certain aspects. We won’t know until the season gets to rolling and they find their niche.”

The scrimmage will also give the Gators a chance to build depth. McDaniel said he plans to give extra playing time to younger players — and even start a few — while his primary starters simply get their feet under them.

Vicksburg and Natchez will have a 15-play junior varsity scrimmage at 6 p.m., followed by two quarters of varsity action. Regular rules will be followed, except for no contact on special teams plays.

“They’ll definitely get in the mix. It’ll help them with the junior varsity, and because people don’t realize we do have a senior defense but we have a younger defense behind them. Hopefully they can get some reps in the second quarter,” McDaniel said. “And we have a junior-laced offense, but we have some 10th-graders behind them that we want to see out on that field. We may have one or two 10th-graders starting Friday. We can’t wait to see what they can do.”

The Gators did not get much of a chance to see what they could do during the spring game in May. Lightning ended that contest against Terry early, after half a quarter and about a dozen total plays.
McDaniel said the team has had a good summer, but he’s still eager to see its first extended live action since last November’s playoff loss to West Point.

The Gators will open the regular season next Friday against Germantown, in the Red Carpet Bowl at

Warren Central’s Viking Stadium. Kickoff for that game is at 6 p.m. and tickets can be purchased through GoFan.co.