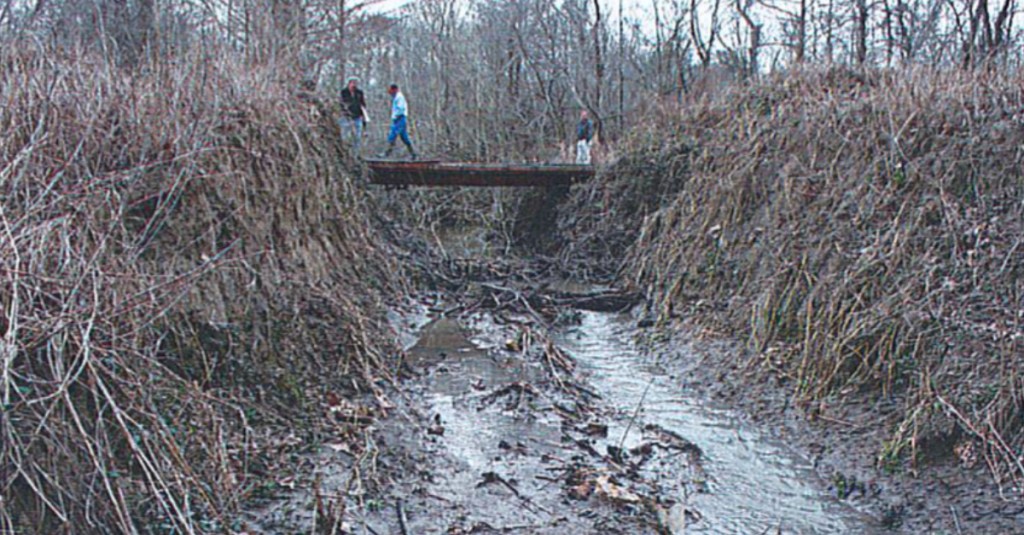 This photograph of the Brunswick Circle Levee displays the open earthen levee, not in flood stage. When there is a flood risk in the area, the private landowner historically has filled in the gap in the levee with packed soil and timbers. (Photo courtesy of the Mississippi Levee Board)

The Warren County Board of Supervisors voted on Monday to act as a pass-through agency for the allotment of state money to be used for improvements to the Brunswick Circle Levee.

During its most recent session, the Mississippi State Legislature awarded $75,000 to Warren County for the project under House Bill 1353, local and private legislation providing improvements to the levee that is located in the Eagle Lake area. However, the levee is located on private land owned by resident Eustace Conway, meaning the county cannot legally repair the levee itself.

Brunswick Circle itself encompasses approximately 4,000 acres of land originally suited for farming. However, it is now home to 230 homes and one church in the Eagle Lake area.

Peter Nimrod, the engineer for the Mississippi Levee Board, said in May that the levee structure dates back to the 1880s. As such, the open culverts in the levee structure don’t have modern gates to protect against floods. It’s up to the landowner to pack the openings with soil to block out floodwaters. The levee sits on private land, but the funds were allocated due to the impact flooding has on the area beyond the private lands.

District 2 Supervisor William Banks, in whose district the levee is located, said he supported the county acting as a pass-through agency for the $75,000, as long as it was made clear to all involved that the money is not coming from the county and the county is not responsible in any way for any aspect of the project.

“As long as they understand that the county has nothing to do with who they contract with, the scope of work and what is done, we have no responsibilities for whoever they choose for the work,” Banks said. “We’re just a pass-through and we just have the money.

“This is a totally private group and they were able to speak directly with Rep. (Kevin) Ford in order to obtain this money,” Banks added.

The Supervisors voted unanimously in favor of the motion.