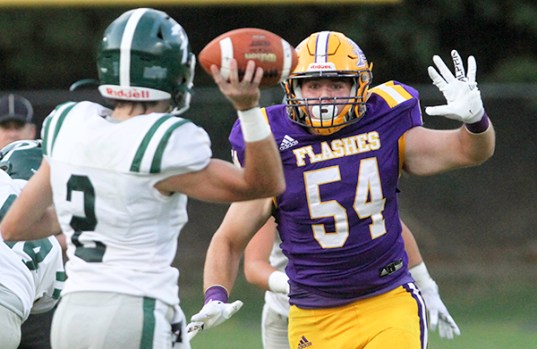 St. Aloysius defensive lineman Jax Oglesby (54) tries to knock down a pass from Park Place quarterback Jonah Summers (2) in the first half of Friday's game. St. Al won, 12-0, for its first victory in a season opener since 2006. (Paul Ingram/For the Vicksburg Post) 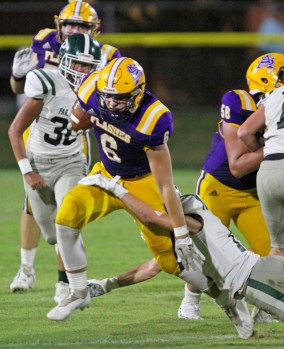 St. Aloysius running back Thompson Fortenberry (6) fights his way through the Park Place defense. Fortenberry had a team-high 85 rushing yards and a touchdown in the Flashes 12-0 victory. (Paul Ingram/For The Vicksburg Post) 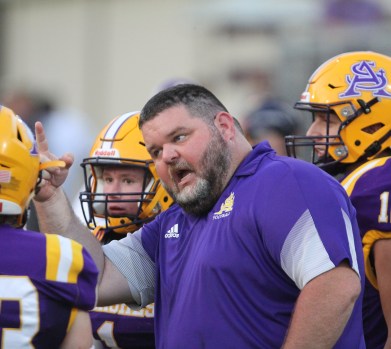 Thompson Fortenberry and Damien Reeves each scored a rushing touchdown in the second half, the defense pitched a shutout, and the Flashes defeated Park Place 12-0 on Friday to win a season opener for the first time since 2006.

“It’s wonderful to end that 16-year streak. We ended a bad streak and started a good one,” St. Al coach Bubba Nettles said. “It solidified the work we’ve been putting it. (Park Place) had kids dropping left and right with cramps and we were standing tall.”

It took until the second half to get going. An early injury to running back Padre Gray, the team’s leading rusher in 2021 and a senior leader, affected the Flashes mentally, Nettles said.

Several penalties short-circuited a promising drive, and the game remained scoreless at halftime.

“Everybody knows what a tremendous talent that Padre is, and when he’s in the huddle all of our guys feel like everything is all right,” Nettles said. “When he went down, everybody panicked and got a little confused. It took a while to get their feet under them, but once they did we went back to pounding the football.”
Gray did not return to the game, but Nettles did not believe his ankle injury was serious. Fortunately, the Flashes have two other very capable backs who picked up the slack.

Fortenberry finished with 125 yards and Reeves had 50 as they carried the offense in the second half. Fortenberry capped the opening drive of the second half with a 20-yard touchdown run, and Reeves sealed the win with a 15-yard TD with 3:39 left in the fourth quarter.

Other players also stepped up in a tense, tight ballgame, Nettles added. Senior punter Jake Brister boomed a 75-yard punt that flipped field position and had two others downed inside the 10. Linebackers Thomas and Will Dowe filled some of the leadership void on a defense that started the season with a shutout.

“They were put in some precarious positions and rose to the occasion,” Nettles said of his defense. “A lot of growing up tonight, which is what you want. Losing Padre put them into a little panic on offense, and while we were figuring it out the defense kept us in the ballgame.”