Sports column: We’re all a part of the Red Carpet Bowl’s success 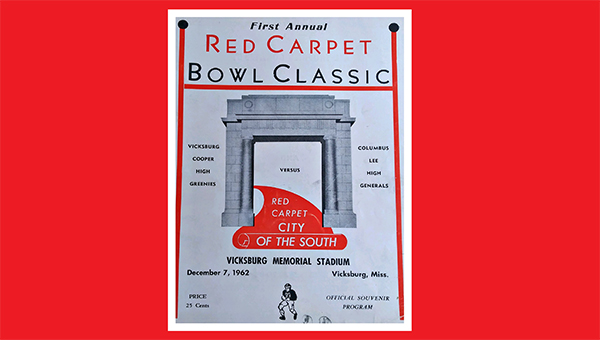 The game program for the first Red Carpet Bowl in 1962. Vicksburg's annual high school football tradition will celebrate its 60th anniversary with this year's doubleheader Aug. 26 at Warren Central. Vicksburg plays Germantown in the first game at 6 p.m., and then Warren Central takes on Forest Hill at 8:15 p.m.

In several interviews over the years, former Cooper High School football coach Gene Allen often mentioned that he wasn’t sure the Red Carpet Bowl would last more than a few years after it was started in 1962.

“When we started, we had no earthly idea where it would go. We knew it would run at least two years,” Allen said in 2018.

It did make it that far — and then some. It’s celebrating its 60th birthday next Friday (Aug. 26), when Vicksburg High and Warren Central face Germantown and Forest Hill, respectively, in a doubleheader beginning at 6 p.m. at Warren Central’s Viking Stadium.

High school football often calls upon tradition to inspire players and fans. Whether it’s the winning culture of a school, or sons playing on the same fields their fathers did, some sort of link to the past is celebrated in every corner of Mississippi from the smallest 1A team to the largest 6A.

Even so, in a world where our attention spans have shortened to milliseconds, keeping any annual event alive for six decades is a remarkable achievement.

Allen died in July at the age of 91. He was the last of the original founders of the Red Carpet Bowl — local businessmen Harold Baldwin and Ray Roberts, alderman Travis Vance Sr., and then-Vicksburg Post sports editor Billy Ray were also in that group — and had long since passed the torch.

As much as their efforts in organizing the event, however, it’s the entire community in Vicksburg who have allowed the game to both continue and thrive.

It’s the business owners who sponsor the game and provide the financial backing to bring in quality teams, and give them an experience that makes them want to come back.

It’s the officials within the Vicksburg Warren School District who have worked with the RCB committee to allow the game to continue. Giving up a lucrative gate from a home game is no small sacrifice, and coordinating the logistics of moving teams and crowds in and out between games of a football doubleheader is no small feat.

It’s the coaches of both teams, who sometimes don’t have the say they’d like in picking an opponent but roll with it anyway.

And, of course, it’s the fans who buy tickets and T-shirts and support the game year after year. Without them there would be no Red Carpet Bowl — or high school football, or any sports, for that matter.

All of those groups, and probably a few more that I left out, deserve a thank you for keeping this thing going.

Sixty years ago, a group of five men started something that thousands have taken part in and enjoyed. It’s a remarkable Vicksburg tradition that endures. We’re all a part of it, and hopefully will be for a few more generations to come.