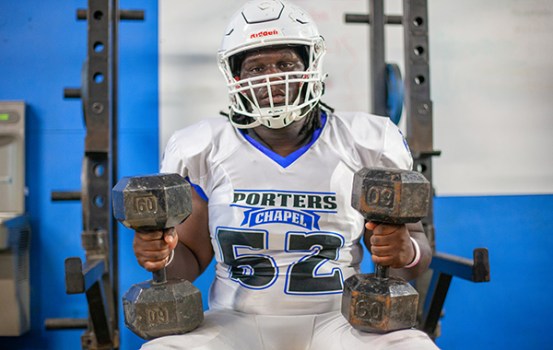 Porter's Chapel Academy senior Maureon Simms is in his fifth season as a starter on the Eagles' offensive line. (Ben Martin/The Vicksburg Post) 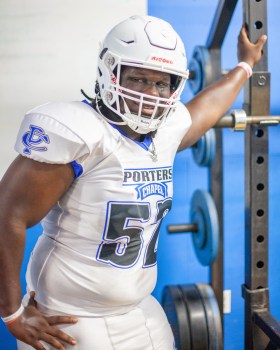 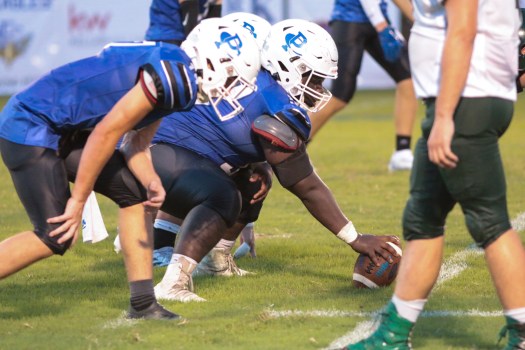 Editor’s note: This story appears in the 2022 edition of “Playmakers,” The Vicksburg Post’s annual football preview magazine. “Playmakers” is included in The Post’s weekend print edition on Aug. 20, on sale now, and is also be available at the newspaper’s office at 1106 Washington St. in downtown Vicksburg.

Maureon Simms is not an old man in the classical sense. He’s an 18-year-old high school senior with his whole life ahead of him.

In football terms, however, he’s practically a modern day Methuselah.

Simms is heading into his fifth season as a varsity starter on Porter’s Chapel Academy’s offensive line. He’s not only started every game during that span, he’s played almost every snap. The senior has been a rock in the lineup, and a linchpin of the program.

“There haven’t been that many guys that played six years in our program since I’ve been here. It’s a hard thing to do. So when you see a guy who’s put in the work and been as successful as Maureon, you realize how rare guys like that are,” PCA head coach Blake Purvis said. “I’ll be shocked to have another guy come through and play as many snaps as he’s played. Those guys are rare — especially linemen.”

Simms played for PCA’s junior high team in seventh grade, but a lack of overall roster depth thrust him into the varsity lineup the following season. Right from the start, he said, he was tested and groomed for success.

Simms is short and stocky now, about 5-foot-9 and 280 pounds. He’s powerful — he can squat nearly 400 pounds — but not huge by lineman standards. He was even smaller as an eighth-grader when Purvis put him up against the team’s best lineman every day in practice.

McKinley Skipper, a three-year starter, was 6-foot-4 and about 250 pounds. Playing varsity football two years earlier than most people was nerve-wracking enough for Simms. Having to prove himself against an MAIS all-star only made it worse.

“When he first told me I was going to play and going to start, I was nervous a little bit because it’s a grown man’s game,” Simms said. “But Coach Purvis put me up against one of the biggest linemen, which is McKinley Skipper. He had me blocking him every day, because I’m going to see guys like him that are way taller and bigger than me and I’m going to have to learn how to block.”

Simms not only learned how to play on the offensive line, however. He learned how to turn weaknesses into strengths. Since he couldn’t dominate opponents with sheer bulk, he focused on perfecting his footwork and technique. Going against Skipper helped him understand how to play against taller defensive linemen.

Because of PCA’s small roster size, he’s played nearly every game on the defensive line as well.

“Being on the line, you’ve got to be aggressive in the trenches on the O-line and D-line. It don’t matter what size you are. It’s all about skills and technique,” Simms said. “That’s how I was in the eighth grade. I was pretty small and everybody was bigger and faster. The only way I got better was if I moved my feet and kept them in front of me, and used my techniques. I’m big and strong now.”

He’s also a grizzled veteran who is passing along some of the same things he learned five years ago to his younger teammates.

The role of team leader is something Simms has equally achieved by default as one of only three seniors on the roster; evolved into with his experience; and earned with his skill and durability.

It’s also a role he has recognized and embraced, he said.

“Every year you’re going to have guys who look up to you. Especially the little kids that are playing peewee. If you start doing the right things and taking the right path, they’re going to follow that,” Simms said. “Right now I get to show the younger guys what it’s like to play a grown man’s game. They want me to be a leader to them, and that’s why I love the game so much and I love the position I’m at right now.”

Purvis said Simms’ leadership extends beyond the field. He said his senior is the embodiment of leading by example in the way he carries himself in the locker room and in school.

“He has never given me one ounce of trouble. He shows up, he works, and he goes home,” Purvis said. “He’s one that’ll clean the locker room after everybody has gone home. He’s not a vocal leader, but he’s earned the respect of the guys on the team. You wish you had an offensive line full of guys like that.”

No matter how much he’s played, Simms is not too set in his ways to learn something new. He’s mostly played guard and tackle to this point, but is expected to move to center this season.

Center, especially in eight-man football, is the most important position on the offensive line. They’re the one responsible for making pre-snap adjustments and reads based on what the defense is doing. Simms has filled in at center, but this will be the first time he’s played the position on a full-time basis.

“I hadn’t played center in a good, long time. Last year when Bridges Williams got hurt in our scrimmage game I had to step in and I did a pretty good job. My first time playing center since ninth grade,” he said. “It’s difficult for me, because I had to remember what being a center was all about — leadership at the front, be perfect with the snaps, make play reads, make block calls.

Just as he’s done for four years already, and going on five. Heading into his final high school season, and possibly his last year of organized football ever, Simms is determined to go out strong. PCA reached the MAIS playoffs for the first time in seven years last season, and Simms wants to build on that and leave a legacy as he finally exits the stage.

“It’s my last year,” he said. “I’ve got to make each and every one of them count, because I know how important it is, being a senior, it’s your last chance on the football field and you’ve got to give it all you’ve got. Once it’s gone, it’s gone.”