LOOKING BACK: A tale of three townhouses 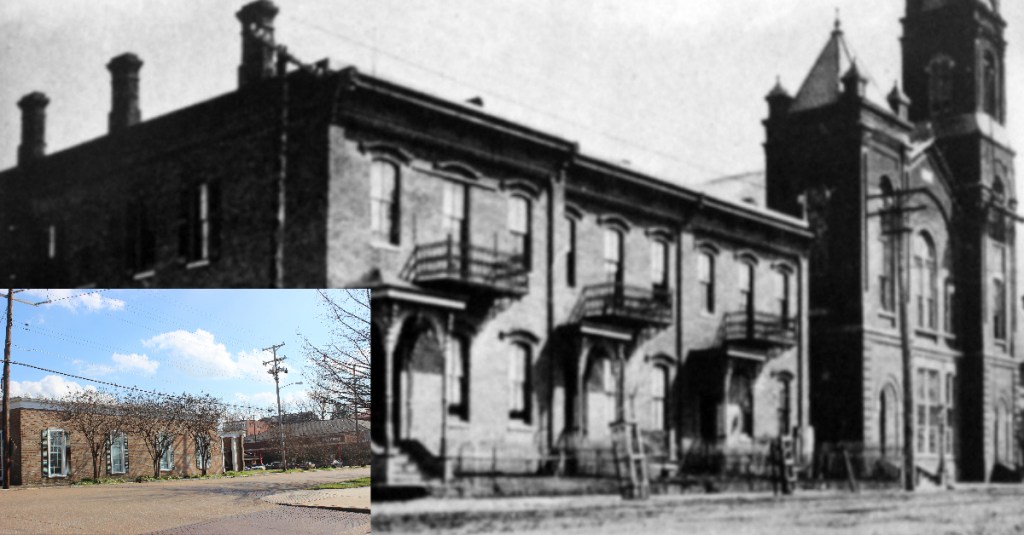 The townhomes formerly located in the 1200 block of Cherry Street are pictured here in 1905. INSET: The site of the townhomes today. The building was demolished in the 1960s. (Photos Submitted)

Mitchell was building a house further south on Cherry Street at the time. The new house was under construction by the firm of Curphy and Brothers, the owner of which was William Curphy.

The Vicksburg Herald reported that while Curphy was working on the house, standing on a scaffold, it fell and “precipitated him to the ground, a distance of 25 or 30 feet. He received two ugly scalp wounds and was seriously injured internally by the fall, but we understood last night that he was doing well.”

Mary Martin owned a millinery shop on Washington Street and apparently was very well respected. Her obituary on Sept. 11, 1883, in The Post, stated that she was born in Ireland and came to the United States in 1851, moving immediately to Vicksburg.

“Some 10 years ago Miss Martin returned to her native place and built a handsome home for her aged parents who could not be induced to leave the old country, and during their lifetime she was a faithful and loving daughter to them, taking care of the in their declining years. Her acts of kindness and charity in this city are numerous, and many have cause to bless her for her generosity.

“She has raised and educated several young ladies, and at the time of her death had two little girls whom she had adopted, their parents dying in 1878. To these little ones, she was a kind and generous patron, sparing no pains to raise and educate them in a manner that would reflect credit upon them in the afterlife. Many tears will be shed for this generous lady, who never tired doing good and hose life has been one of good deeds.”

In 1905 when the oldest photo was taken, the townhouse on the left was the home of A.B. and Annie Lee (he was an attorney and civil engineer), their children Henry and Bertram, and Mrs. Alice Gamlen. The center townhouse was inhabited by Nettie and D. Downs (he was a contractor and builder), Miss Amelia Martin and Mrs. Bettie Martin.

A.S. Kaufman (who was a co-owner of Kaufman and Fishel Cigars, Tobacco, and Billiards on Washington Street), Mozart Kaufman, Bertie Kaufman, and Mrs. Lena Rose (widow of Manuel Rose) lived in the last townhouse. The buildings were demolished in the 1960s.