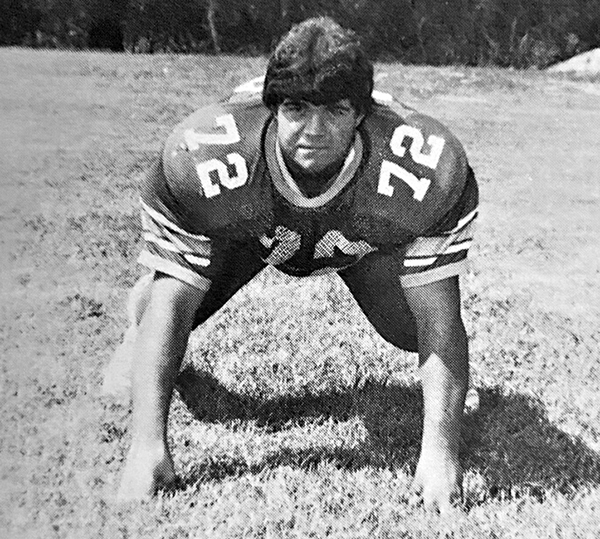 Porter's Chapel Academy will retire the No. 72 football jersey of Miles Hallberg during halftime of Friday's home game vs. Manchester Academy. Hallberg went on to play at Mississippi College and was a first-team All-Gulf South Conference selection in 1987. He died in 2019. (Submitted to The Vicksburg Post)

At 6-foot-2 and 280 pounds, Miles Hallberg was a very large man. He left a legacy that might be even bigger.

Hallberg was the first football player from Porter’s Chapel Academy to earn a scholarship from a four-year school. This Friday night, he’ll have his jersey No. 72 retired in a halftime ceremony during PCA’s home game against Manchester Academy.

Walter Hallberg, PCA’s boys’ basketball coach and Miles’ cousin, said more than 100 of the latter’s family members and former classmates are expected to attend the festivities.

“It’s proud for the whole family. I think there’s going to be about 30 Hallbergs there,” Walter Hallberg said. “It’s a proud moment for us. There was a Hallberg at PCA from 1973 to 1999. It’s in our blood. We love Porter’s Chapel. I love being a coach there. It’s going to be a special night.”

Miles Hallberg graduated from Porter’s Chapel in 1983, and went on to play football at Mississippi College. He was a three-year starter at offensive tackle for the Choctaws and a first-team All-Gulf South Conference selection in 1987.

Hallberg also played baseball, basketball and track and field at PCA. He lived in Spartanburg, South Carolina for much of his adulthood but often returned to Vicksburg to visit family and friends and take hunting trips.

Walter Hallberg said the jersey retirement is a tribute to not only Miles’ athletic acheivements, but to his character.

“I think he was just that good a friend,” Walter said. “Porter’s Chapel Academy isn’t a big community, but I think every classmate of his is coming. People were trying to do this even before he passed away.”

There was talk of retiring Miles’ football jersey for years, and it picked up steam after he suffered a fatal heart attack in May 2019. Things finally came together this summer.

Miles’ cousin Eric and former classmate Brian Jones spearheaded the effort, and an unplanned encounter took it to the next level.

“We took our cheerleaders to a camp in Starkville. It just so happened that we ate at Eric Hallberg’s restaurant up there, and Eric mentioned it and we got to talking about it,” said PCA football head coach and athletic director Blake Purvis.

Retiring Miles’ jersey is only part of the celebration of his legacy.

A scholarship fund for PCA’s students was started in his name and quickly received enough donations that Walter Hallberg is hopeful it can be turned into a larger endowment for the school and its athletics programs.

Porter’s Chapel and Manchester Academy will play Friday at 7 p.m. Before the game, PCA alumni are invited to attend a dinner in Hallberg’s honor in the school’s cafeteria. The dinner is free, but donations to the scholarship fund are encouraged.

Although homecoming is later in the season, this event is shaping up as a de facto school reunion. Purvis said alumni from at least a half-dozen states are planning to attend.

“It’s also a great opportunity for us as a school to re-engage our alumni,” Purvis said. “A lot of them probably haven’t been here in a very long time. It’s a great opportunity to showcase the school and what we’ve got going on, and the positive steps we’ve taken over the years.”