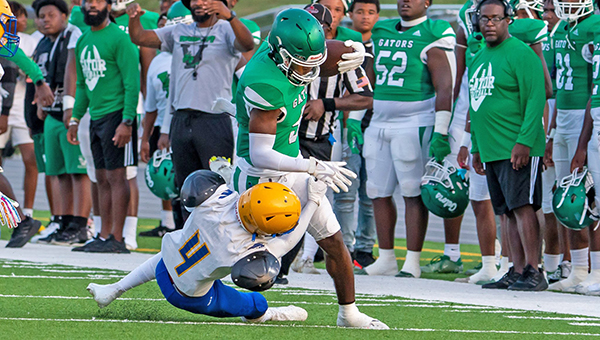 Vicksburg High running back Johnny Smith tries to run through the tackle of a Natchez defender during last week's preseason scrimmage. Vicksburg opens the season Friday at 6 p.m., against Germantown in the Red Carpet Bowl at Warren Central. (Cedric Tillman/Vicksburg Warren School District)

On the eve of the 2022 high school football season, the Vicksburg Gators have their sights set on winning region and state championship trophies.

The first order of business, though, is acquiring another trophy that has eluded them.

The Gators open the season by facing Germantown in the Red Carpet Bowl Friday at 6 p.m., at Warren Central’s Viking Stadium.

Vicksburg has lost five consecutive times in the Red Carpet Bowl — including a 34-14 setback to Germantown in 2021 — so ending that streak is goal No. 1.

“Red Carpet Bowl or not, we want to win,” Vicksburg coach Todd McDaniel said. “It’ll be a great thing for the program to go out there and bring home a Red carpet Bowl trophy and get the momentum going into the next weekend. It’s a very obtainable feat. The thing is to stay focused and take one at a time.”

The Gators’ high hopes for this season are rooted in a potent blend of talent, experience and success. Nearly every key starter is back from a team that reached the second round of the playoffs in 2021. Many of them are entering their third year in the lineup, and several have received multiple scholarship offers from Division I colleges.

Vicksburg’s last season-opening win, however, was in 2016. Starting off 1-0 would not only provide a momentum boost heading into a Week 2 rivalry game vs. Warren Central, McDaniel said, it would show the Gators have taken another step in their upward progression as a program.

“This is going to be my fourth opportunity playing in it, so going out and winning it would mean a lot,” McDaniel said. “It’s not like we’re going out my first year when we had six weeks of practice and didn’t even know the kids’ names. Then last year we had opportunities to win it and didn’t get it done. Now it’s my third year with these guys, so they know what’s expected.”

Vicksburg’s first live game action went well. It dominated Natchez on both sides of the ball in a 22-6 victory in a two-quarter preseason scrimmage last week.

Natchez’s only touchdown came on a defensive fumble return. DeCorey Knight, Malik Montgomery and Johnny Smith all scored rushing touchdowns. The only complaint McDaniel seemed to have, in fact, was a sideline snafu that delayed a kickoff.

“I thought the guys played extremely hard the other night. I was a little disappointed getting the kicking tee on the field. We couldn’t find it,” he said with a chuckle. “But other than that I was happy with the progress we’ve made. We made some mistakes, of course, but the mistakes that we made are correctable mistakes.”

This week’s opponent is entering the latest stage of an ongoing rebuild.

Germantown finished 4-7 last season, lost seven of its last nine games, and underwent a coaching change for the second year in a row. The Mavericks have not reached the playoffs or had a winning record since moving up to Class 6A in 2019, but McDaniel wasn’t discounting them as a capable opponent.

“It’s going to be a really good game. They’re going to be the same type of team as us, really blue collar, but I see where they’re spreading it out a little bit more now,” he said. “We’ve got our work cut out for us, but I think we’re built for the task.”

On their end, McDaniel said the Gators’ biggest challenge is transitioning from practice mode to game mode. After having plenty of time to perfect plays and schemes all summer, now they only get one chance to make it work against an actual opponent.

“We’ve been preparing for it all summer. So it’s just transitioning from everything we work on in practice to executing it on Friday night,” McDaniel said. “The difference is, in practice you might be able to run it three or four times in a row. On Friday night you get that one time and you have to execute.”