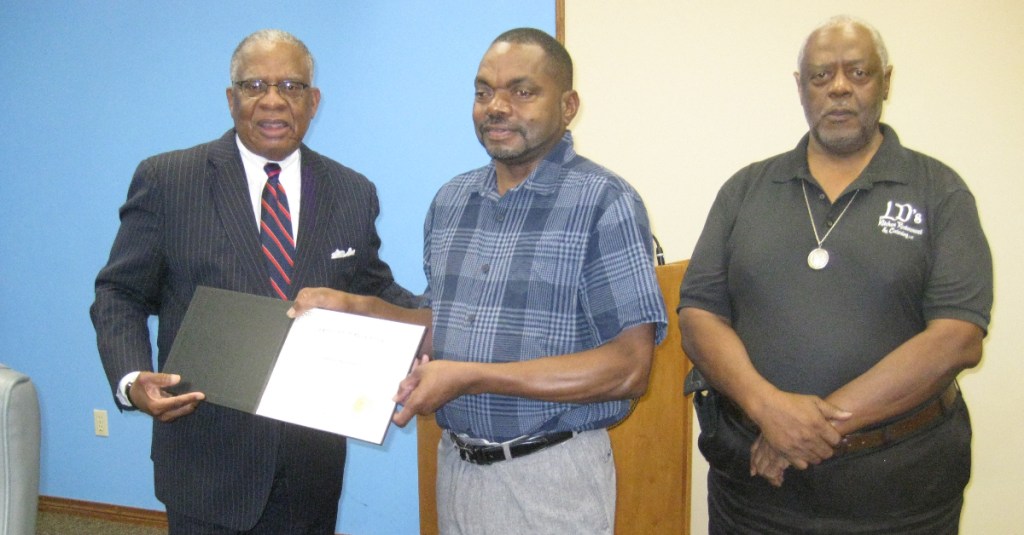 Mayor George Flaggs Jr., left, presents James Anderson with a proclamation honoring him for his efforts on Aug. 7 to save Johnny Stanfield, who was going into a diabetic coma. Pictured with Flaggs and Anderson is Larry Prentiss, a friend of Anderson. (Photo by John Surratt | The Vicksburg Post)

The Board of Mayor and Aldermen on Thursday recognized James Anderson for his efforts that saved a man who was going into a diabetic coma.

Anderson was walking down Washington Street past the Vicksburg Event and Business Center on Aug. 7, where he sometimes works as a handyman for the owners, Dr. Deborah and Johnny Stanfield.

While going to Speedmart across the street, Anderson noticed Johnny in his vehicle parked outside the Event Center building and went along his way. A few hours after he got home, Anderson said he felt something wasn’t right. He went to check to see if Johnny’s vehicle was still there. It was.

After failing to flag down passing cars, Anderson flagged down a Vicksburg police officer who called for an ambulance.

Johnny was taken to the Merit Health River Region Hospital and then flown to the University of Mississippi Medical Center in Jackson, where he is still recovering.