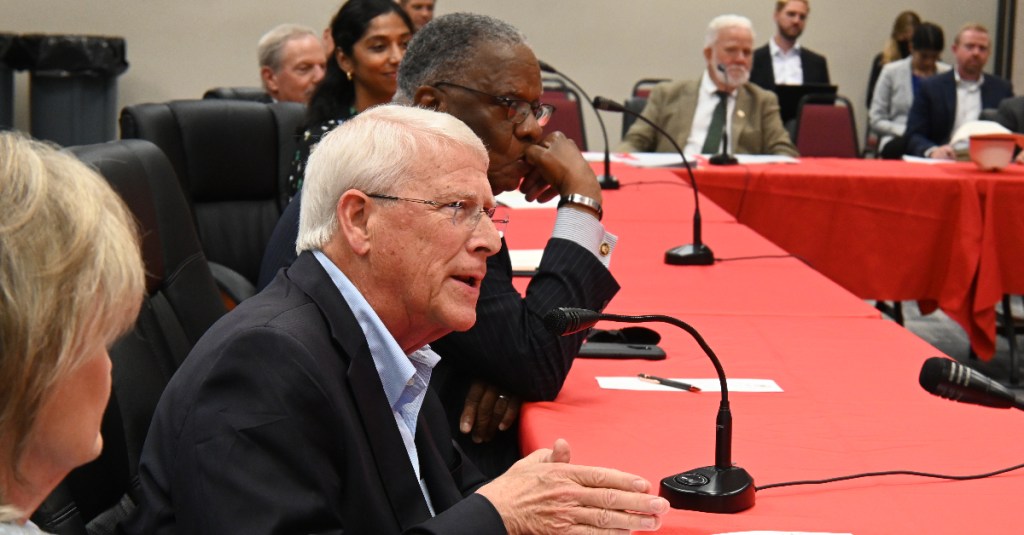 U.S. Sen. Roger Wicker, center, sits next to Vicksburg Mayor George Flaggs during a Wednesday meeting with state and federal officials regarding the Yazoo Backwater Pumps project and flooding in the South Delta. (Photo Submitted)

A revised proposed plan by the U.S. Army Corps of Engineers for the Yazoo Backwater Pumps project was discussed by an engineer for the Mississippi Levee Board at Wednesday’s meeting of the Mississippi River Commission during its low water tour stop in Vicksburg.

Levee Board engineer Bobby Thompson also said there needs to be better communication between the Corps and the levee district officials.

“As you know, (the) backwater project was vetoed again in 2020, but thank goodness the CEQ (Council on Environmental Quality) has been riding herd on the EPA (Environmental Protection Agency), Corps Headquarters and the Fish and Wildlife Service to come up with a solution,” Thompson said.

Each agency, he said, is coming up with alternatives.

When Levee Board officials got their first look at the proposed revised 2022 Corps plan, Thompson said, “We were kind of shocked at first but we like it.”

According to Thompson’s PowerPoint presentation, under the proposed revision, floodwaters would be at 89.5 feet instead of 87 feet before the pumps are turned and plans call for a 22,500 cubic feet per second (CFS) pump as opposed to the 14,000 CFS pump.

The plan calls for the acquisition of more acres of reforestation easements, which means less cropland is protected but less mitigation would be required with a higher pump-on elevation.

Also, according to the presentation:

• More water would be impounded at Steele Bayou Structure during the low-flow season.

• Thirty-four supplemental low-flow groundwater wells would be installed along the levee to pump water into Mississippi Delta Streams during the low-flow season.

“Great for the aquatics,” Thompson said. “If it will work, we’re for it.”

The larger pump, according to the presentation, will provide more protection for people, homes, cropland, roads, infrastructure, wildlife, fish, trees and the environment. The 2022 Alternative, however, floods significantly more land initially before the pumps are turned-on but the larger pumps provide significant flood control for the lands above 89.5 feet.

On a different matter, Thompson said the Corps’ Vicksburg District and the levee district officials need to improve communications.

“We used to get plans to review and that doesn’t happen anymore,” he said. “We’ve got about 70 years’ worth of engineering experience in our little shop.”

Thompson added the levee district would like to be able to consult with the Vicksburg District.

“It’s hard to see what’s going on in our district,” he said. “Let’s get back to where the Corps and the levee board worked together for flood control.

“Let’s plan on levee performance, not levee failure and we need the Corps to leave the levee accreditation process to preserve the long-standing mandatory insurance exemption under NFIP (National Flood Insurance Program) for communities protected by accredited levees.”