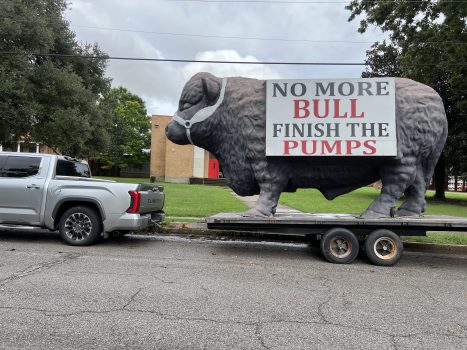 A giant bull owned by South Delta farmer Clark Carter was parked in front of the South Delta High School Auditorium on Wednesday ahead of a listening session on the Yazoo Backwater Pumps. (Photo by Anna Guizerix | The Vicksburg Post) 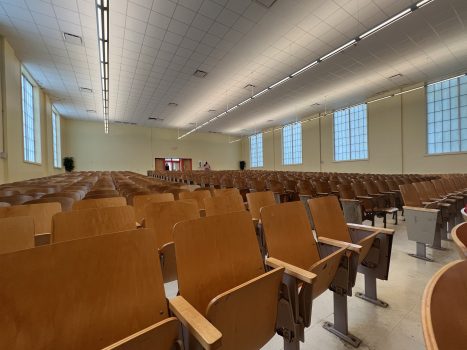 The auditorium at South Delta High School in Rolling Fork has a seating capacity of 600. (Photo by Anna Guizerix | The Vicksburg Post) 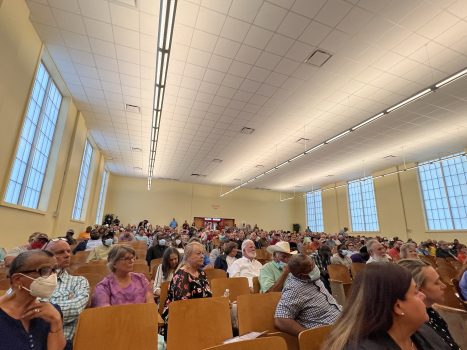 More than 600 people were in attendance at a listening session with government officials on Wednesday at South Delta High School. (Photo by Anna Guizerix | The Vicksburg Post) 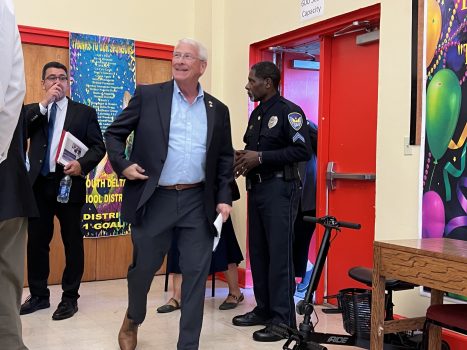 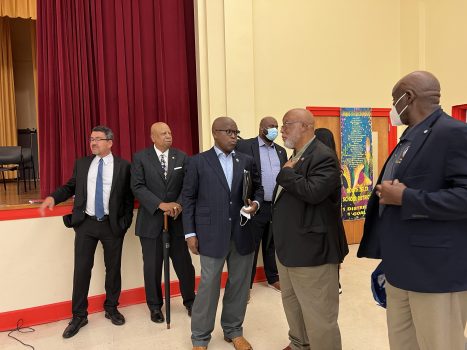 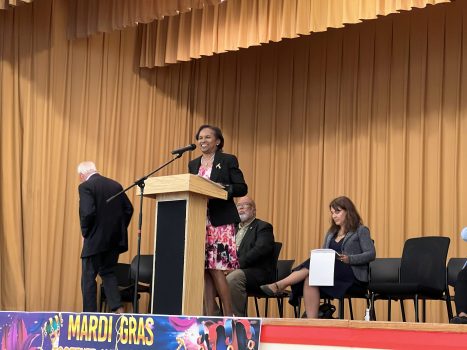 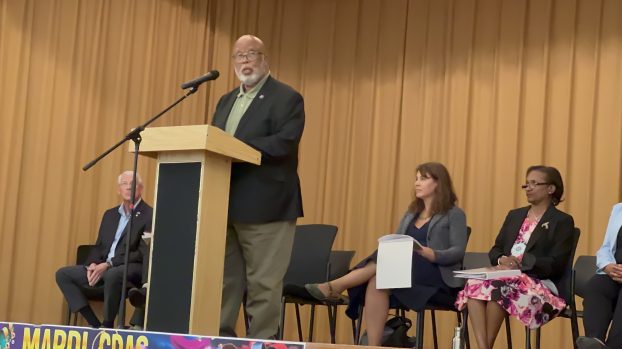 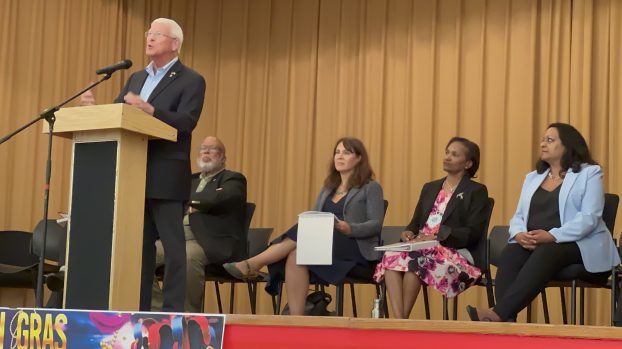 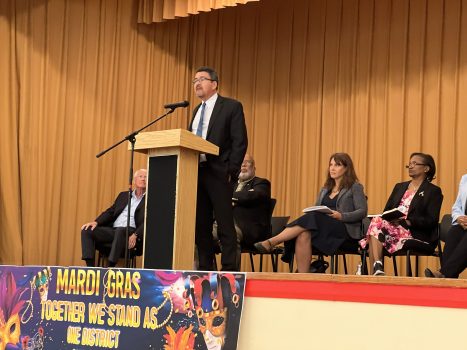 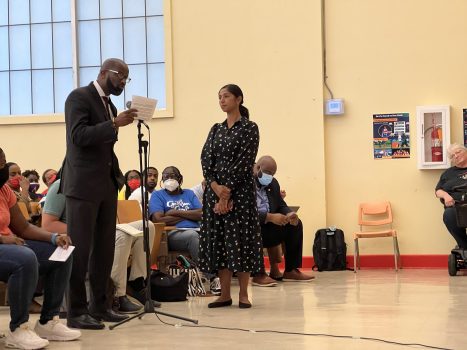 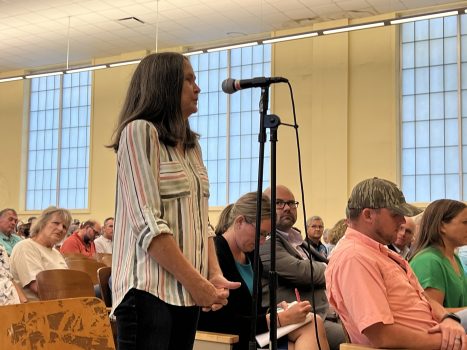 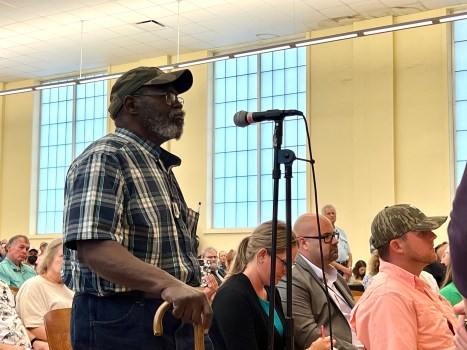 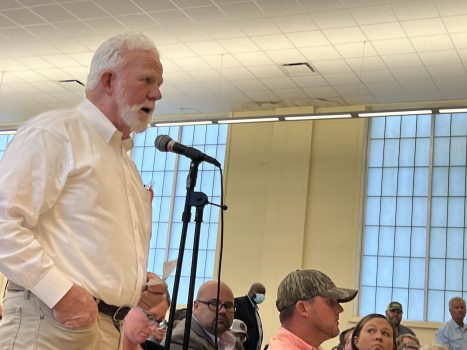 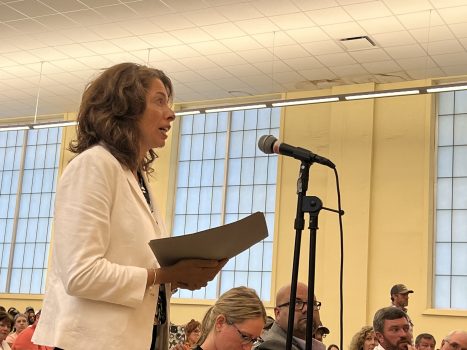 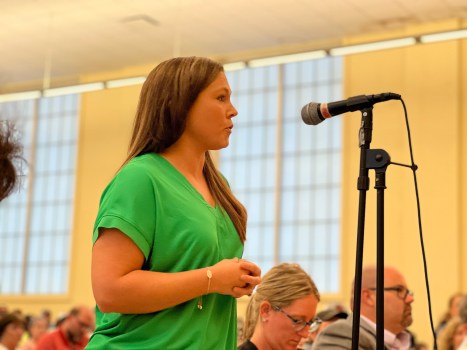 “How many of y’all live here and want to see the pumps?” Carter said.

More than 600 hands went into the air amid shouts of “Amen.”

Carter, who owns nearly 7,000 acres of farmland in the South Delta — and the iconic giant bull often seen parked on Highway 61 North that reads “No more bull, finish the pumps” — was the final community member to address an interagency delegation invited to the area for a listening session regarding the Yazoo Backwater Pumps Project.

“This group is tasked with the responsibility of hearing you, and going back and putting together a report, as well as sharing other resources that might be available to you,” Thompson said as part of his remarks.

Wicker explained that the federal delegation would take the information given to them at the listening session, discuss it and devise a plan to address short- and long-term solutions for the people affected by floods in the Yazoo Backwater area.

“Some 10 months ago, the Environmental Protection Agency decided it was going to recognize the 2008 veto of the Yazoo Pumps Project,” Wicker said. “I was assured by the director of the EPA (Michael Regan), that within 12 to 16 months they would come forward with a plan to replace the one that had been vetoed.

“… The Backwater Pumps were promised to three states decades and decades ago with the Mississippi River and Tributaries Program,” Wicker added. “Louisiana got theirs, Arkansas got theirs, and for some reason, we have not been able to get — for decades now — the same thing that our friends across the river are entitled to.”

In her address, Mallory pledged to continue working toward an equitable solution for those impacted by the pumps.

“As we are thinking about how we design the right approach to address this particular issue within the frame of what we’re dealing with, we have to recognize that the impacts of climate change are continuing to have intense impacts on people on the ground,” she said. “We are in a place now where, I think, the thoughts about what kind of a pumping system, if a pumping system was appropriate 40 or 50 years ago, that’s not necessarily what we’re going to need today.

“Part of our challenge is how to be realistic about the flooding that is occurring now and will continue and to come up with ways to have creative solutions for addressing those problems.”

Following introductory remarks from the Washington delegation onstage, attention was turned to attendees of the meeting.

Attendees of all races and backgrounds were present, from large landowners to business owners, to retirees and scientists. Many shared their personal experiences of the floods, along with their requests for relief. The 2019 Yazoo Backwater Flood submerged 548,000 acres of land in the backwater area, 231,000 of which was farmland.

Rolling Fork native and Vicksburg attorney Ty Pinkins, who circulated pamphlets and flyers to attendees entering the auditorium, presented an alternate perspective on solutions outside of the pumping stations.

“As long as I can remember, we’ve watched cities like Clinton, Meridian, Oxford … receive all types of funds to help their communities,” Pinkins said. “What do these communities have in common? All of them are more wealthy than Sharkey and Issaquena counties combined.

“The only thing that’s been offered to these communities regarding this issue is a pump,” he added. “The pumps are being offered to us, even though Sen. Wicker said in a subcommittee meeting that the pumps won’t stop the flooding. I think these community members deserve to know the truth about all the options available to them — not just the pumps.”

Ann Dahl, leader of the Finish the Pumps organization, presented her findings as well as written documentation for the government delegation.

Dahl moved to the Eagle Lake area in 2018 and said she’s since devoted her life to bringing exposure to the plight of people in the Backwater area.

“Most of us in this room probably have PTSD because of what we’ve experienced,” Dahl said. “I have studied all sides of this issue and all the alternatives. Some of these easement programs that some say we can put our land into, they are backlogged so that we can only take one or two applications a year. At the amount they’re paying per acre, if all the farmland that floods in the Delta was put in this program, it would cost $970 million and it would also take 70 years at the rate they’re going right now.”

One of the first to speak was Troy Brown, a Rolling Fork native who currently lives in Seattle, Wash., but flew home to attend the listening session.

“I walked across the (South Delta High School) stage in 2008. In 2019, I lost a near friend because of rising floodwaters,” Brown said. “… I’m not here to argue about what solution will work the best. But what I am hearing is that a pump won’t do it alone. There’s not many engineers in this crowd, but there are in the government entities you have.

“We shouldn’t have to come up with the solutions,” Brown added. “This is a plea to help this community so we can move forward from this and no mother or father has to bury their child again from flooding that should’ve been avoided in the first place.”

Another community member, Anderson Jones, Sr., shared stories from his childhood in the South Delta and battling floodwaters throughout his life.

One of his most distinct memories, Jones said, was walking into South Delta High School as a teenager and being taunted for his mud-covered clothes, which were soiled as he waded through water around his home to get to class.

“My father went through the 1927 flood, and I went through it in 1973,” Jones said. “I’ve been through this, having nightmares from when I was a child. I’m still not in my home and it’s been three years since 2019.

“Just think about it: I stayed behind trying to save what I had. Just think, when the lights go out and it’s raining at night, and you’re scared to shut your eyes because all you can hear is the alligators and frogs hollering,” Jones added. “I was the only one out there, in all that water.”

Victoria Darden Garland, who was born and raised on a farm in the South Delta and stayed behind in the 2019 flood with her 76-year-old father, told of the horrors she witnessed and the arduous journey it took to get from her family’s home to dry land each day.

Garland’s mother, whom she said could not swim and feared drowning, was forced to leave the property during the flood and move to Vicksburg.

“I stayed behind with my father because he has a ring levee around his house and when it floods, we have to be there to pump out the water that comes in. If we don’t it will ruin the septic system, the house, everything,” Garland said. “We had to park at a neighbor’s house and boat through a creek. … The things we saw on the trips to and from, the smell and the decaying flesh (of wildlife) is more than enough to turn your stomach in the morning when you’re just trying to leave and make some money.”

Authorities on the subject

In addition to people whose homes and livelihoods are impacted by the floods, a number of career scientists and a member of the Mississippi Levee Board took their turns addressing the government delegation.

One such scientist was Jackie Henne-Kerr, a retired wildlife biologist who’s lived in the area since 1990 and worked for Delta National Forest. Kerr explained the firsthand impact she saw on wildlife in the area during floods, and how the rising waters hamper scientists like herself in their ability to conduct research.

Kerr described her experiences boating through the flooded forest, and the lack of biodiversity she witnessed by observing animal sounds. She heard calls from a couple of different birds, but not from the robust animal population she was used to during non-flood years.

Hank Burdine, who serves on the Mississippi Levee Board, spoke about the stomach-turning sights and smells he witnessed during the 2011 and 2019 floods. He also questioned the notion that ring levees, or levees fashioned from soil and sandbags in a circular formation around a structure, are an effective solution for flood protection.

“I live here. I carried my boat up and down here every day during the 2011 and 2019 floods,” Burdine said. “The 280,000 acres that would be left underwater with the pumps that are designed is national wildlife property. Will ring levees and raising houses solve the problem of the devastation of wildlife caused to this ecosystem during these floods?

“In 2019 — and I’m sorry if I’m choking up — I saw something I swear I never want to see again. It’s called the Tree of Death,” he said. “There were over 400 turkey vultures in one tree burping and vomiting because there were carcasses everywhere. The dead deer, the baby fawns, things I never want to see again. I want to know if a ring levee will solve the environmental devastation that goes on without these pumps.”

Word from the Opposition

Near the end of the listening session, a representative from the Audubon Society and one from the Sierra Club of Mississippi addressed the delegation.

“Over 230 conservation organizations, social justice groups and science professionals joined over 93,000 members of the public with Audubon in re-securing federal protections for this hemispherically important area, but we’re also reaching out to you as federal leaders to focus more resources to protect people’s lives, property and livelihood,” Mastrototaro said. “By the (U.S. Army Corps of Engineers’) own stunning findings, the pumps would only reinforce the area’s systemic environmental injustices. Eighty percent of the benefits would go to farmers and farm owners and agribusiness to drain wetlands and intensify agriculture.

“The pumps are not designed to and will not protect these vulnerable communities from flooding.”

Both Mastrototaro and Miller were booed by attendees as they returned to their seats.

The meeting ended with a poem:

Assistant Secretary of the Army for Civil Works Michael Connor, who has testified in congress stating the pumps would be an effective solution to mitigate issues, spoke to The Post following the listening session.

“This is a call to act,” Connor said. “It’s not a call to continue to assess the situation.”