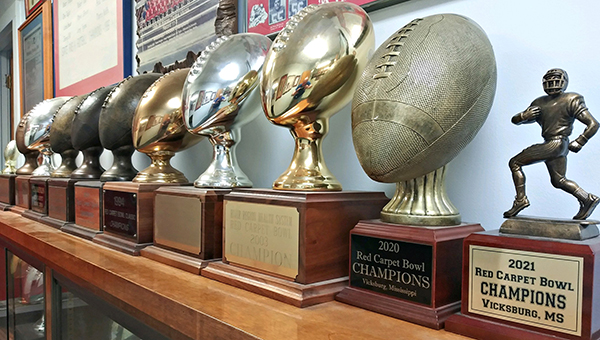 For the past 50 years, the proud traditions of Warren Central and the Red Carpet Bowl have often intertwined.

The Vikings have played in 37 of the Red Carpet Bowl’s 60 editions and won 25 times. The game has served to celebrate championships and begin title runs.

Its recent stretch, though, might be one of its most impressive yet.

Warren Central has five consecutive wins in the Red Carpet Bowl, including an active streak of three shutouts in a row. It has outscored those five opponents 114-6.

Considering all of the variables that can negatively affect a team in its season opener, even head coach Josh Morgan was at a loss to explain the Vikings’ dominance.

“I don’t know if I can put my finger on the exact thing. I know we try to prepare our guys the best that we possibly can,” Morgan said. “We expect and are able to play a lot of young men, and that’s why that number is even more impressive. Early in the year you’ve got to play a lot of people just for conditioning purposes. That’s an impressive number. I hope we can continue that trend.”

On paper, the Vikings should have little trouble doing just that. They’ll face Forest Hill in game two of the 60th annual Red Carpet Bowl doubleheader, with kickoff scheduled for approximately 8:15 p.m. Friday at Viking Stadium.

Vicksburg plays Germantown in the first game, at 6 p.m.

Forest Hill has not finished above .500 since 2008 and had a 4-7 record in 2021 that included a 27-0 loss to Warren Central in the Red Carpet Bowl. The Patriots also had a late coaching change this summer.

Morgan said Forest Hill has its share of talented athletes, but wasn’t quite sure how they’d use it after the coaching change.

“You don’t know what to expect. You’ve got a brand new coaching staff coming in. They had a change in regime after spring,” Morgan said. “But as far as personnel, they’re huge. Much like last year’s team they’re going to be very athletic. They’ve got a big quarterback with a big arm, and any time teams can throw it and run after they catch it they’re only one play away.”

The scrimmage only lasted two quarters, and Morgan noted that both teams were tinkering with personnel and schemes as much as trying to win. Still, he did not want to dismiss the benefits of knocking off the state’s top team no matter the caveats.

“As far as the mental side of it, if we can play at our best and be at our best, it goes back into believing in what you’re doing and giving it everything you’ve got and trying to get better every week,” Morgan said. “I would be downplaying it if I said it didn’t help our psyche about competing at the highest level and believing in it.”

Winning the Red Carpet Bowl, he added, is also special. The spectacle of the game and its history make it a unique experience.

Adding a trophy to the program’s large collection at the end of it is even better. That’s a point the coaching staff seemed to subtly hammer home to their players this week. Prominently displayed in and on a trophy case in an entryway to the fieldhouse were a couple dozen Red Carpet Bowl trophies from over the years.

“When you mention the Red Carpet Bowl you know you’re starting your season and all that comes with it. It’s a big game for our community, with both high schools in it, so it’s football season when you hear Red Carpet Bowl,” Morgan said. “Our kids are very blessed to be able to play in the Red Carpet Bowl. It means a lot to them. It’s a tradition.”