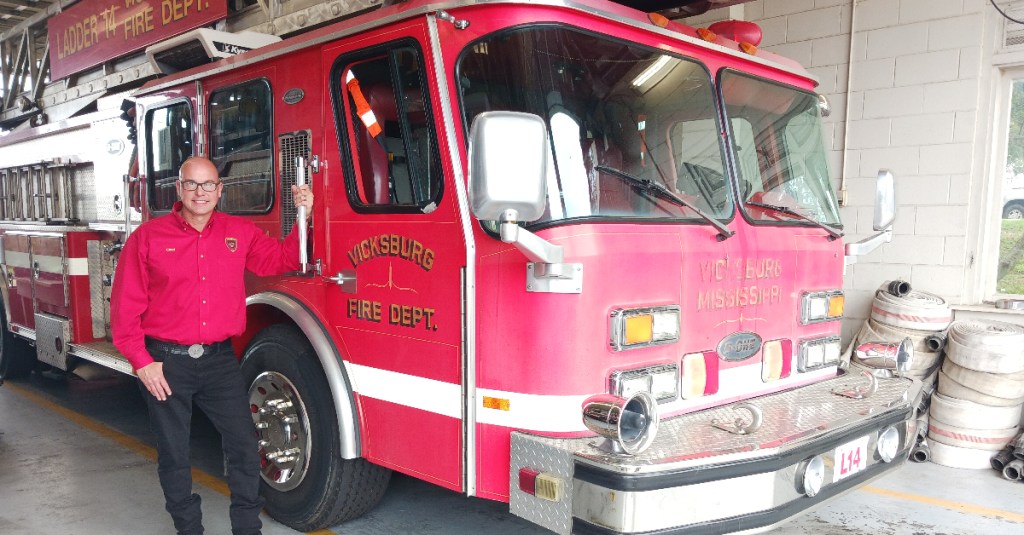 Vicksburg Fire Chief Craig Danczyk stands by Ladder 14, the truck he drove as a lieutenant. Danczyk's last day as chief is Wednesday. He is retiring after 27 years with the department. (Photo By John Surratt | Vicksburg Post)

Another member of the Group of 17 is retiring from the fire department.

The Group of 17 refers to 17 Vicksburg firefighters who joined the fire department in 1995. Many members of that group moved up the ladder to take leadership positions as lieutenants, captains and battalion chiefs, including the most recent member of the group to retire, Fire Chief Craig Danczyk, who entered the fire service as a probationary firefighter at age 22.

Wednesday, Danczyk will walk out the doors of the Central Fire Station for the last time and move on to a new career in industry.

“We really had a great group; a lot of talented people,” he said. “They were just a great group of guys, they were really a good competitive group to begin that journey with. We had out of my group, I think everyone was an officer but one that stayed with the organization. Most of us still keep in touch.”

At the time, Danczyk had an associate’s degree from Hinds Community College in accounting and business administration and was planning to go to the University of Southern Mississippi.

“I became a young parent and worked at Waterways Experiment station as a student contractor at 40 hours a week and no benefits. You had to take six or more college hours a semester (to keep the job),” he said.

He applied for the fire department in 1994 and was hired the next year.

“At that time I felt I needed a full-time job with insurance and retirement to provide for my family and the career here has done that and more,” he said. “We always had insurance and been able to pay the bills — it’s been a very good job.”

Mayor George Flaggs Jr. named Danczyk, who was a deputy chief at the time, fire chief in 2017. In the past five years, he has taken steps to improve the city’s fire insurance rating from a 5 to a 4. The department has acquired a new fire station, five new trucks, and will soon receive two new ambulances.

“He was great; he was a great chief,” Deputy Fire Chief Derrick Stamps said. “He transformed the department and reduced our fire rating. His leadership and knowledge will be sorely missed from the department”

“Chief Danczyk has had a good career; he was instrumental in my career,” Deputy Chief Trey Martin said.

Martin recalled when he was an entry-level firefighter, Danczyk was the instructor for his two-week orientation and he built a relationship with Danczyk.

“I set goals and through my career and began molding myself after him,” Martin said. “He was a smoke diver and I became a smoke diver.”

Martin, who was named deputy chief when Danczyk was named chief, said they worked well together during the chief’s tenure and Danczyk taught him about the ins and outs of running the fire department.

Reflecting on his career, Danczyk said he has spent almost eight years in administration and 19 and-a-half as a shift employee, “so I felt that was a really good balance.

“This is probably a good time to transfer command and give somebody else an opportunity to serve as chief of the Vicksburg fire department,” he said.

Considering the future of the department, Danczyk believes “there’s a lot of good things in place so my advice to the next chief would be, hold on to all the things that are working.”

One area of concern, however, is the challenge of getting young, talented people to join the fire department

“I’m seeing less people wanting to have service jobs,” Danczyk said. “There’s different occupations that have labor issues and public safety is seeing some labor issues. The young people here, I believe in my heart that if the pay was a little higher there would be more coming in and I hope we get there.”

He said finding the money to be able to attract workers, continue to purchase equipment and supplies and provide services in the face of inflation is a challenge the board and the new fire department administration will have to eventually address.

“I think what I’m seeing, we have a lot of things going well here with tourism, and the sports complex and more influx of people spending money in Vicksburg at hotels and for food and beverages,” Danczyk said. “I’m hoping it’s a good mix of sales tax revenue and finding ways to possibly increase the city budget and pay people more. I know that’s going to be necessary but there has been a push to be more efficient.”

Danczyk said he’s enjoyed working for the city and the opportunity to serve in different capacities.

“That has been rewarding for me,” he said. “I’ve really enjoyed my coworkers, from the beginning until now, and I’ve also enjoyed working with the other departments and even just coming into meetings. The city of Vicksburg team has so many wonderful people and I’m going to miss working with them day to day.

“I hope people remember me as somebody who put in the time — this is more than a job; this is definitely service and I’ve enjoyed the entire experience and I do look forward to new teammates, new experience, new goals. I look forward to that.”