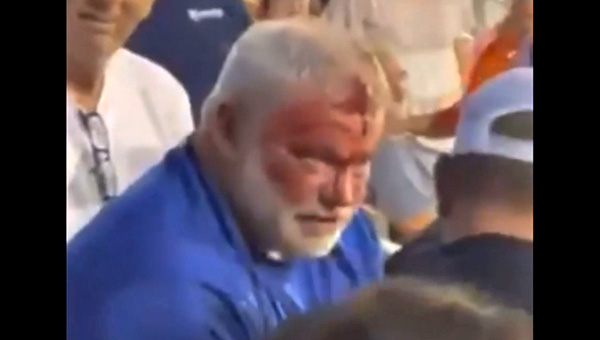 Heidelberg football head coach Jim Nowell is bloodied following a fight in the stands at a game between Quitman and Wayne County on Thusday. Nowell, who coached at Vicksburg High School from 2020-21, was involved in a fight with a fan while scouting the game. (Photo via Facebook) 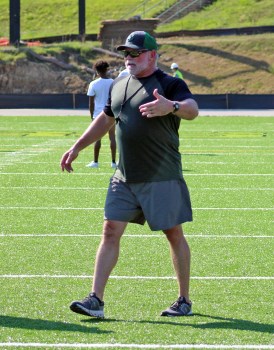 Former Vicksburg High linebackers coach Jim Nowell works at a practice in June 2020. Nowell, now the head coach at Heidelberg High School, was involved in a fight with a fan while scouting a game Thursday night. (File/The Vicksburg Post)

A former Vicksburg High School football coach was involved in a fight in the bleachers during a game Thursday night.

Jim Nowell, the football head coach at Heidelberg High School and a former VHS assistant, was sitting in the stands scouting a game between Quitman and Wayne County when he got into a shouting match with a fan.

Nowell got out of his seat and charged down the steps toward the man, who has not been identified. The two began throwing punches at each other and Nowell got the worst of it. He came up from the fracas with a cut on his forehead.

Several other fans at the game took video of the incident and posted it to social media. The incident quickly went viral, with several national news outlets picking up the story.

Heidelberg is scheduled to play Quitman next week.

Nowell was hired as Heidelberg’s head coach in 2021, and has worked on both the college and high school level.

He has had stops as the defensive coordinator at Pearl River Community College and as the strength coach at Mississippi State, LSU, West Virginia and Western Kentucky.

His career brought him to Vicksburg in 2020, where he was on the football staff as well as being the head coach of the powerlifting team. He led the Gators to the MHSAA Class 5A powerlifting championship in 2021.

Nowell has also worked at Madison Central and Scott Central.