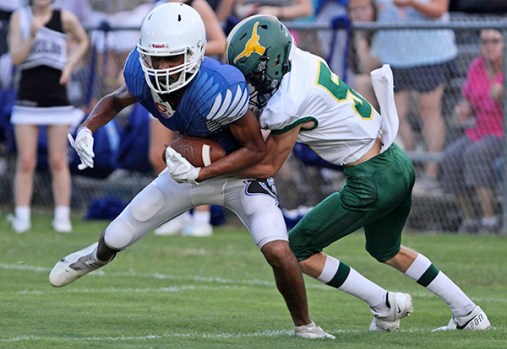 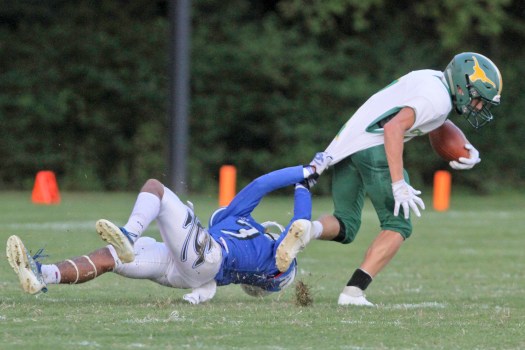 Porter's Chapel Academy's Jase Jung (3) tries to hang on as Manchester Academy's Jake White drags him down the field in the first half of Friday's game. White scored two touchdowns as Manchester won 38-0. (Paul Ingram/For The Vicksburg Post) 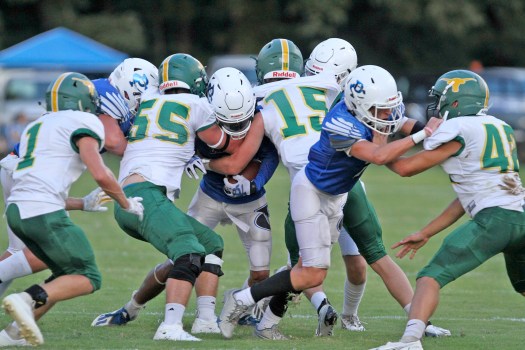 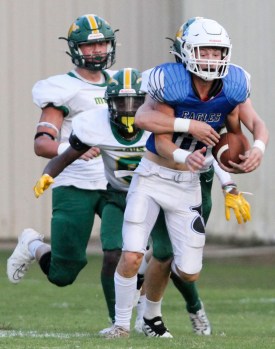 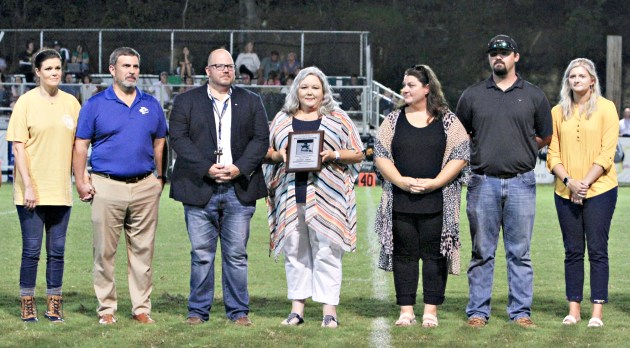 The family of Miles Hallberg receives a plaque in his honor during a jersey retirement ceremony at Porter's Chapel Academy on Friday. Hallberg, a 1983 PCA graduated, was the first football player from the school to receive a college scholarship and went on to star at Mississippi College. Hallberg died in 2019. (Paul Ingram/For The Vicksburg Post)

Porter’s Chapel Academy honored one of its football greats on Friday night, but the current roster didn’t feel much like celebrating afterward.

Jake White scored two touchdowns, and Manchester Academy blew open a close game by scoring 24 points in the second half on its way to a 38-0 victory over Porter’s Chapel.

PCA retired the jersey of Miles Hallberg, who played at the school in the 1980s and went on to star at Mississippi College. The emotion of the night couldn’t help against one of the MAIS’ eight-man football juggernauts, however.

“We knew we were going to have to play a solid football game. Those guys are good,” PCA coach Blake Purvis said. “You don’t get to the level they are by playing sloppy football, and they played very sound football. It’s not an opponent you can make mental mistakes against, or they’re going to hurt you.”

PCA (1-1) stayed in the game for the first half, going into the locker room trailing just 14-0. A turnover early in the third quarter led to a touchdown for Manchester, however, and opened the floodgates.

“I don’t think we played a terrible first half. We had mental mistakes that got us behind the chains and stopped drives. When we were moving the football I thought we had a chance to punch it in a couple of times,” Purvis said. “I thought we were very much in the game. Then we had an interception on the opening drive of the second half and it unraveled.”

Jung had a team-high seven tackles on defense. Noah Porter added six tackles, and Conley Johnston had five tackles and a sack.

After two home games to start the season, PCA will go on the road for the first time next week when it faces Discovery Christian in Florence.