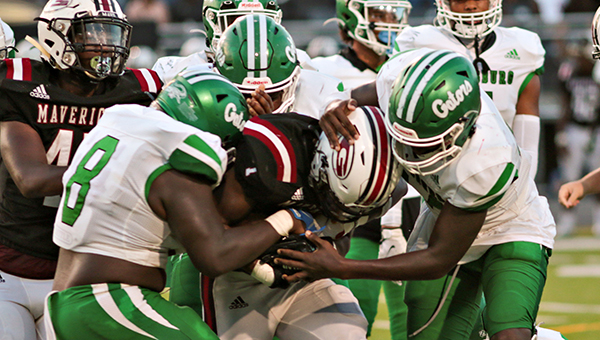 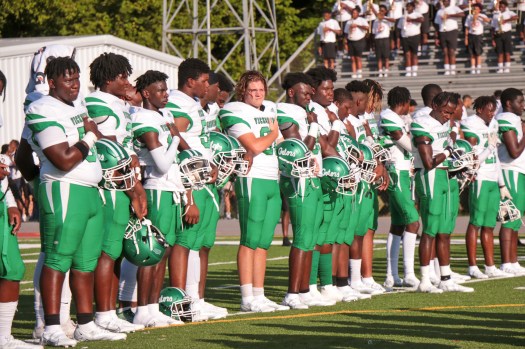 Vicksburg High football players stand for the playing of the National Anthem before the Red Carpet Bowl against Germantown on Friday. (Walter Frazier/For The Vicksburg Post) 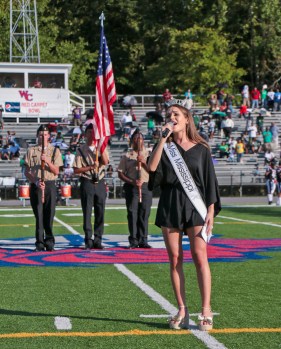 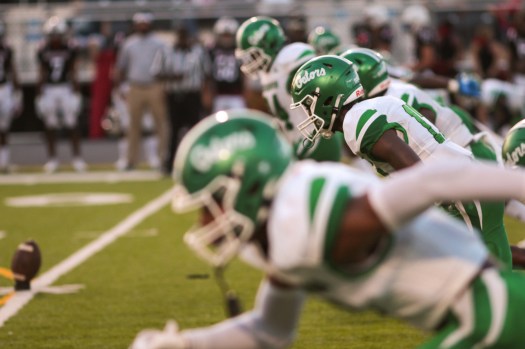 Vicksburg High football players run down the field before a kickoff during the Red Carpet Bowl against Germantown on Friday. (Walter Frazier/For The Vicksburg Post) 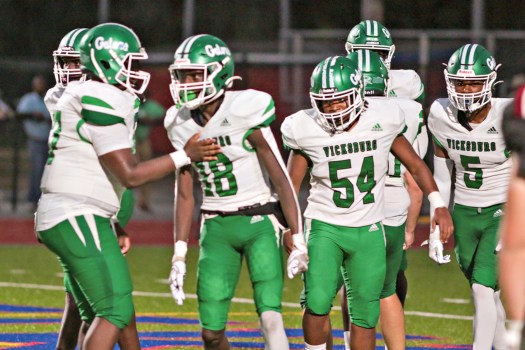 Vicksburg High wide receiver Tyler Henderson (18) celebrates with his teammates after scoring on an 80-yard touchdown pass in the Red Carpet Bowl against Germantown. Henderson finished with four receptions for 93 yards, but the Gators lost 10-6. (Walter Frazier/For The Vicksburg Post)

Germantown only had two big plays Friday night against Vicksburg High — one in the first quarter and one in the final minute.

Nisaiah Bass took a screen pass 40 yards for a touchdown on Germantown’s first play from scrimmmage, and defensive back Krystian Parker broke up a pass in the end zone with about a minute left. The two bookend plays gave Germantown a 10-6 victory over Vicksburg in the 60th annual Red Carpet Bowl.

“It was extremely disappointing,” Vicksburg coach Todd McDaniel said. “We got behind the defense two times in the first half and didn’t score. We got in the end zone and it got called back. I thought it shouldn’t have, and it cost us the game.”

Vicksburg lost for the fifth consecutive time in the season-opening Red Carpet Bowl, despite a stellar defensive performance.

The Gators allowed 49 yards on Germantown’s first two plays, and 58 the rest of the game. Kearris Gilliam had an interception, Demarcus Johnson had a sack, and Dennis Battle recovered a fumble.

Vicksburg also stood tall after Germantown had first-and-goal at the 1-yard line following a blocked punt. That possession in the second quarter ended with a missed field goal.

The only major mistake the Gators made came on the first series. Quarterback Drew McCluskey floated a screen pass over a half-dozen onrushing Gator defenders, and Bass caught it and zipped up the middle of the field for a touchdown and a 7-0 lead.

“The defense did a wonderful job. They couldn’t have played any better,” McDaniel said. “I just wish we could have a couple plays back. When the defense plays that well you have to make sure the offense rewards them.”

Vicksburg’s offense committed three turnovers, had a punt blocked, and constantly hurt itself with mistakes and penalties. One penalty, a false start midway through the second quarter, negated a 10-yard touchdown run by Johnny Smith.

“That was the difference in the game,” McDaniel said of Smith’s run.

The Gators also had two fumbles that they recovered, but resulted in big losses.

“They definitely hurt us, and they hurt us in the down count,” McDaniel said of the mistakes. “There were a few things we’ve got to shore up.”

Even with the steady stream of offensive missteps, Vicksburg had a chance to pull out the victory in the fourth quarter.

After Hayden Houpt kicked a 43-yard field goal to put Germantown ahead 10-0, Tyler Henderson turned a short pass into an 80-yard touchdown to get the Gators back in it with 11:39 remaining.

Henderson finished with four receptions for 93 yards and a touchdown for the Gators. Malik Montgomery added 89 rushing yards.

With about three minutes left, Germantown’s David Gainwell III fumbled and Battle scooped it up. Battle returned it to the 6-yard line, but again Vicksburg’s offense stumbled.

A first down run was stuffed, and on second down quarterback Ronnie Alexander fumbled while attempting a pass. The Gators recovered at the 28-yard line, and Alexander passed to K.D. Sims to the 10-yard line on the next play to set up fourth-and-goal.

Alexander threw a fade to Henderson in the right corner of the end zone, but Parker guarded him perfectly and broke up the pass with 1:05 to go.

“We were going to go to K.D. or Tyler, our two playmakers. We threw up a 50-50 ball and he comes down with it normally,” McDaniel said. “And tonight he didn’t.”