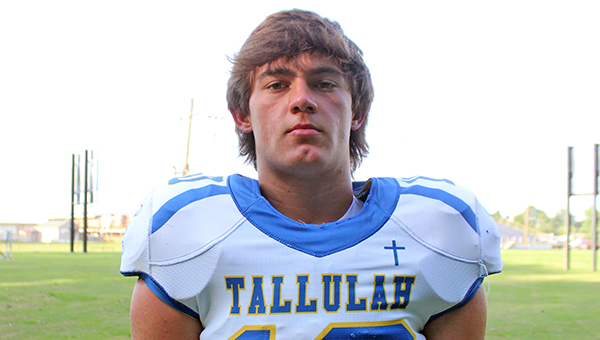 Tallulah Academy quarterback Dee Morgan passed for 262 yards and five touchdowns in a 52-22 win over Franklin Academy on Friday.

Morgan, who was a preseason All-MAIS selection, threw his touchdowns to four different receivers. Landry Tweedle caught two, a 75-yarder in the second quarter and a 5-yarder in the third, and finished with five receptions for 139 yards.

Tallulah (2-0) only led 24-16 at halftime, and then scored four touchdowns in the third quarter. Morgan threw touchdown passes of 18 yards to Morson, 5 yards to Tweedle, and 47 yards to Hopkins. Morgan also ran and passed for a pair of two-point conversions, the second of which put the Trojans ahead 52-16.

Tallulah will go back on the road next Friday, Sept. 2, to play at Riverdale. Kickoff is at 7 p.m.