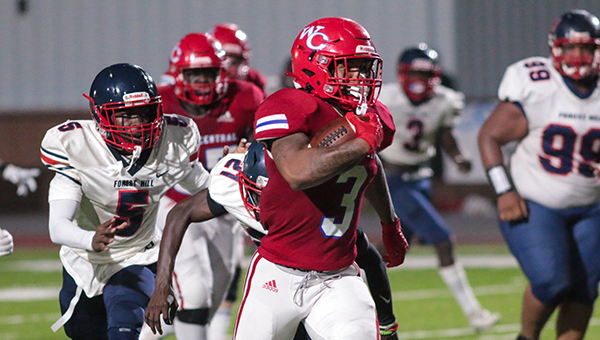 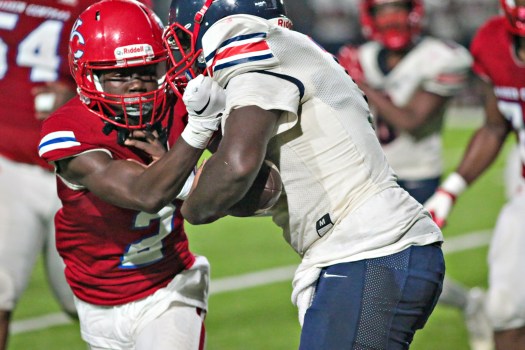 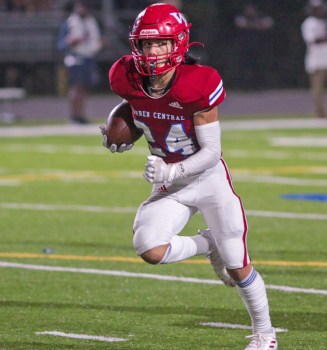 Warren Central receiver Ishmael Trujillo runs down the field after catching a pass in the Red Carpet Bowl against Forest Hill. (Walter Frazier/For The Vicksburg Post) 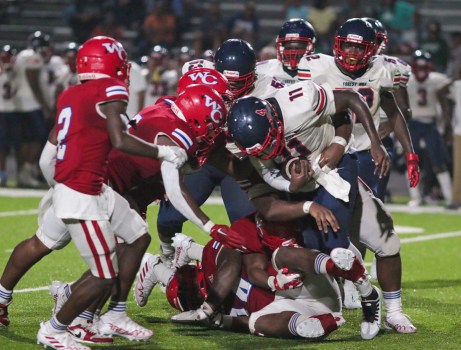 Warren Central worked the late shift in the Red Carpet Bowl, but it didn’t have to put in a lot of hours.

“We did what we had to do,” Warren Central coach Josh Morgan said. “We did some good things and we did some bad things, and we got to play some young ones. The second half we came out a little bit sharper. Overall I was pleased with the guys and how they performed.”

Warren Central continued an impressive run of recent dominance in the Red Carpet Bowl, with its sixth consecutive victory in the season-opening classic. It had its string of three straight shutouts snapped — Forest Hill returned an interception 95 yards for a touchdown in the second quarter — but was never threatened.

Carter got the Vikings rolling with a 64-yard touchdown run and Hall broke a 68-yarder to put the Vikings ahead 14-0 at the end of the first quarter.

Carter and Hall scored again, on 11 and 4 yard runs, respectively, in the second quarter. Wright also threw a 20-yard touchdown pass to Mark Gray to make it 34-6 at halftime.

“We were just trying to be the very best we can be, and play us, and not let the opponent dictate how we perform,” Morgan said.

Warren Central finished its scoring with two more touchdowns in the third quarter, as the MHSAA’s new mercy rule kicked in for the first time. The clock continues to run if a team is ahead by 35 points in the second half, and the rule shortened things up considerably once the game was out of hand.

The rout allowed the Vikings to give some of their backups playing time and ease into the season before they take on crosstown rival Vicksburg High next Friday at 7 p.m., at Viking Stadium.

“It’s always good to get our guys in,” Morgan said. “We work them hard. It goes back to preparing the future of your team, and giving them a reward.”