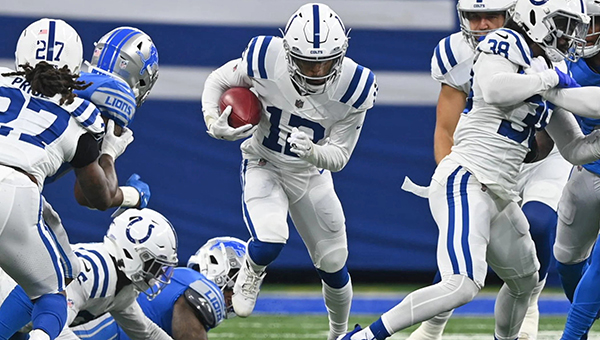 INDIANAPOLIS — For the third year in a row, DeMichael Harris was among the final cuts on the Indianpolis Colts’ roster.

The Vicksburg native was waived by the Colts on Tuesday, as NFL teams were required to trim their rosters to 53 players before the start of the season next week.

Harris, a former St. Aloysius, Hinds Community College and Southern Miss star, originally signed with the Colts as an undrafted free agent in 2020. He was cut at the end of training camp in 2020 and 2021, but signed to the team’s practice squad both times. He has played in 10 regular-season games over the past two seasons.

Harris could still return to the Colts’ practice squad as he did the previous two seasons. The practice squad is a 16-man reserve unit that works with the team but has limitations on how much they can play in regular-season games.

Harris played in all three of the Colts’ games this preseason. He caught a total of three passes for 29 yards and returned two kickoffs for 55 yards.

Harris had been hoping to make the roster as a backup wide receiver or special teamer, but the emergence of several other players such as rookie Alec Pierce and veterans Dezmon Patmon and Mike Strachan crowded the depth chart. The Colts kept six receivers on the 53-man roster and cut four, including Harris.