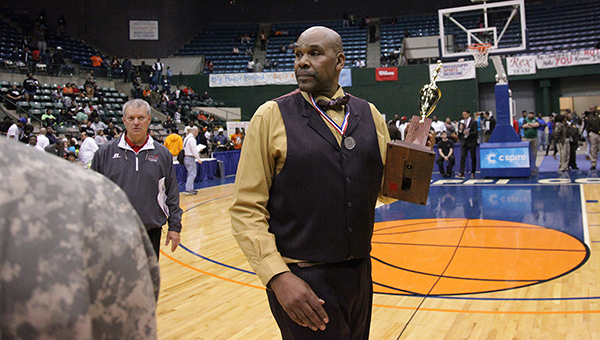 Vicksburg High boys basketball coach Dellie C. Robinson carries the MHSAA Class 5A runner-up trophy off the court following the state championship game in 2014. Robinson, who won more than 400 games and one state title while coaching at VHS from 1992-2017, will be one of seven inductees to the Vicksburg Warren School District Athletic Hall of Fame's Class of 2022. (File/The Vicksburg Post)

Seven Warren County sports legends will take their place in history Thursday night when they are inducted into the Vicksburg Warren School District Athletic Hall of Fame.

The group will be inducted Thursday at 6 p.m., at City Auditorium. Tickets to the induction banquet $20 and are available in advance at the VWSD athletic department office or at the door on Thursday night. Payment at the door is by cash or check only.

The inductees will also be honored during Friday’s Vicksburg vs. Warren Central football game at Warren Central’s Viking Stadium. Kickoff is at 7:30 p.m. and tickets are available through GoFan.co.

The Class of 2022 will bring to 45 the number of athletes and coaches who have been inducted to the VWSD Athletic Hall of Fame since it was founded in 2016.

Here is a look at this year’s inductees:
• Dellie C. Robinson, the longtime Vicksburg High boys’ basketball coach, headlines the group. He led the Gators to the 2003 MHSAA Class 5A championship, and to the state championship game in 2011 and 2014 during a 25-year run.
Robinson won nearly 800 games in almost 30 years as a coach at Vicksburg and Canton High School. He was at VHS from 1992 to 2017 and won more than 400 games there.

• While Robinson was known as one of the best basketball coaches in Mississippi, Robert Erves made his mark on the coaching world as a versatile jack of all trades.

Erves coached Vicksburg’s football, track and powerlifting teams at levels ranging from eighth grade to varsity for nearly 30 years. He had an undefeated season with Vicksburg’s eighth-grade football team and led the school’s powerlifting team to the MHSAA Class 5A championship in 2003.

Erves also had a standout football career as a student in the VWSD. He played at Temple High School, then Warren Central from 1969-72, before starring at Mississippi Valley State.

• Arthur “Bobo” Harris was a star football player and track athlete for Vicksburg High in the early 1980s and went on to play football at Southern Miss.

Harris, the Gators’ quarterback his senior year, played in the 1982 Mississippi All-Star Game and was an all-state selection at three different positions. He was also selected as the student-athlete of the year in Mississippi.

• Kelvin Reed was one of Warren Central’s top boys basketball players in the late 1980s. He led the Vikings in scoring as a sophomore, and steals and assists as a junior and senior, and was twice selected to The Vicksburg Post’s All-County team.

After high school, Reed moved on to Pensacola Junior College in Florida. He set the school’s assists record and led the team to the 1993 NJCAA Division I national championship.

• Jimmy Sweet was a standout football player and track athlete at Temple and North Vicksburg from 1970-73.

Sweet was part of the Temple team that won the 1970 Red Carpet Bowl and Black Big 8 championship, and then scored 18 touchdowns in three seasons at North Vicksburg.

After his playing career, Sweet spent 28 years working for the Vicksburg Police Department and was involved in a number of community organizations and programs.

• Bowen Woodson was an outstanding two-sport athlete for Vicksburg High from 2005-08.

In baseball he was a first-team all-state and Mississippi all-star selection, batted over .400 twice, and led the Gators to the MHSAA Class 4A championship series in 2008.

In soccer, Woodson was an all-state goal keeper and The Vicksburg Post Player of the Year in 2008. In the 2007-08 season he posted seven shutouts as the Gators reached the Class 4A semifinals.

Woodson went on to play baseball at Tulane. He played six positions in his career and started 149 games over four seasons.
Woodson was also a two-time member of the Conference USA All-Academic team and is working toward his Ph.D in civil engineering at the University of Texas.

• Donna Brown-Wynn was a three-sport athlete — basketball, track and field and softball — at Vicksburg High. She was the softball team’s MVP in 1989 and won state championships in track in several events, but excelled the most in basketball.

Brown-Wynn played at Mississippi State and was a four-year starter at point guard. She set an MSU record for 3-pointers in a game that stood for nearly 20 years.

After her playing career, Brown-Wynn went into coaching. She spent two years as an assistant at Mississippi State, then 13 more on the staff at Belmont University in Nashville.

Since 2003, Brown-Wynn has returned to her hometown each summer to host the week-long Play 2 Wynn basketball camp.