Gators gear up for rivalry game with Warren Central 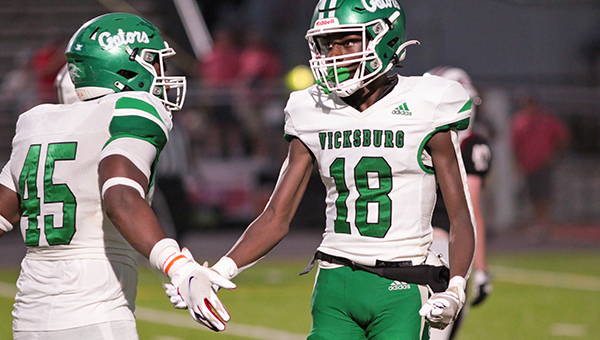 Vicksburg High receiver Tyler Henderson (18) celebrates with teammate Caleb Bryant (45) after scoring a touchdown in the Red Carpet Bowl against Germantown. The Gators will return to Warren Central's Viking Stadium this Friday night to take on their crosstown rival Warren Central. (Walter Frazier/For The Vicksburg Post)

There’s an old football saying that the next game is the biggest. It’s a cliche, but sometimes — as is the case this week for Vicksburg High — it’s uniquely true.

The Gators will head across town to Viking Stadium for the second week in a row to play Warren Central. They’re not only trying to shake off a season-opening loss, they’re out to end a 10-year losing streak to their rival.

It’s not a region game, but in terms of morale and bragging rights it feels just as important, Vicksburg coach Todd McDaniel said.

“I think Vicksburg fans forget we’ve got another nine teams on the schedule,” McDaniel said with a laugh. “It’s a big rivalry and it’s fun to be a part of. As a coach or even as a player, you don’t want to let your city down. Your parents can go to work on Monday and have their chest poked out, and you can’t say anything to me for the next 365.”

Ever since the series began in 1981, Warren Central has owned it. The Vikings have won 33 of the 41 meetings in the River City Rivalry matchup, including the last 10.

Five of Vicksburg’s eight wins came in a row, from 2007-11, and it hasn’t won since. It has scored more than seven points only twice during its current losing streak.

Vicksburg has high hopes for this season, with 16 starters coming back from a seven-win team that reached the second round of the MHSAA Class 5A playoffs in 2021. Finally beating Warren Central would vault a big mental hurdle on several levels and launch the Gators into next week’s Region 2-5A opener against Canton on a positive note.

“Being able to go out there and get that win would be tremendous for the program and great for the team and coach morale” McDaniel said.

The Gators are also trying to find their footing after stumbling out of the gate. They committed three turnovers, among a slew of offensive mistakes, in a 10-6 loss to Germantown in the Red Carpet Bowl last week.

McDaniel was also stewing over a touchdown that was called back in the second quarter. Fullback Cedrick Blackmore was called for a false start, but video of the play showed that he didn’t appear to move early.

“We had some miscues. We definitely should have still won that football game. But when you get points taken off the board for phantom calls, that really hurts,” McDaniel said. “We will shore up our offensive woes, and hopefully this Friday night you’ll see a different offense on the field.”

McDaniel said there were still plenty of good things to take away from the loss.

The defense allowed just 107 total yards — nearly half of it on Germantown’s first two plays from scrimmage — and gave them a chance to pull out the win in the fourth quarter. A fumble recovery and long return by sophomore linebacker Dennis Battle set up first-and-goal with less than three minutes to play. The offense went backward, though, and a fourth-down pass from the 10-yard line was broken up in the end zone with 1:05 remaining.

“That definitely says a lot about the team. The team never stopped fighting,” McDaniel said. “My first year I got there, they probably would have folded the tent at halftime. They believe they are a very good football team, and they’re going to continue to go to work.”

Now they’ll try to put the disappointing opener behind them and deal with a Warren Central team that crushed Forest Hill 48-6 in the second game of the Red Carpet Bowl doubleheader.

Warren Central rushed for 251 yards in its victory and cruised to a 34-6 lead by halftime. McDaniel wasn’t sure how much he could take away from it for scouting purposes.

“I don’t know how much energy they had to exert on Friday. I’m sure we did not see their whole playbook,” he said with a grin.

What he does know is that this latest edition of Vicksburg-Warren Central should be a slugfest along the lines of their recent meetings.

Warren Central won 17-0 in 2020 and 7-6 in 2021, and both times had to claw for its wins. Last year, each team scored on its opening drive and then not again. Vicksburg had a late touchdown pass negated by a holding penalty.

McDaniel sees some similarities in the philosophy of these two teams — a strong running game and defense are bedrocks of both — and said it should be a good game.