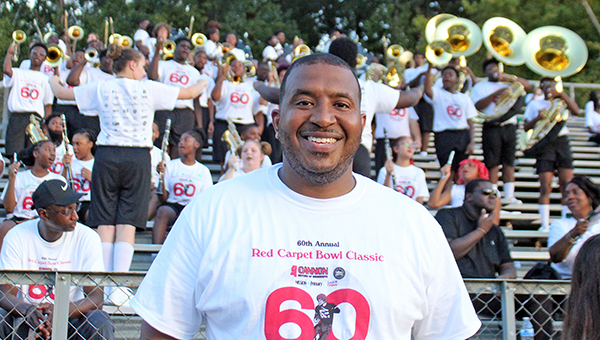 When he looks back over the past decade of his life, James Lewis compares it to a movie or a fairytale.

In 2012 he was a teacher’s assistant at the Grove Street Alternative School, just getting his start as an educator and making $800 a month with no benefits. Thanks to a lot of hard work and a few well-timed breaks, he’s now in one of the most prominent jobs in the Vicksburg Warren School District.

Lewis, a Vicksburg native, has been hired as the VWSD’s next athletics director. His hire was approved during last week’s meeting of the district’s board of trustees and he officially started the job Monday.

“It’s really exciting to get a chance to come back home,” Lewis said. “I’m a product of the Vicksburg Warren School District. I got my start here. This is where I cut my teeth and got a chance to start in education as a teacher-coach. My story is made for the movies.”

The 36-year-old Lewis’ career has been quite a rocket ride. After his humble beginnings at Grove Street, he joined Warren Central’s boys basketball coaching staff as a junior high assistant in 2013.

He led Warren Central’s ninth-grade team to a 42-8 record and three consecutive Little Six Conference championships, which opened the door for his first varsity head coaching job. He was hired at Jim Hill High School in Jackson in 2018, and was the MHSAA Region 2-5A Coach of the Year for the 2021-22 season.

“The year before I got there I think we only won one game. It was a true rebuilding process,” Lewis said of his tenure at Jim Hill. “But we took our time, did it the right way, and in two years our ninth-grade team won the JPS district championship. This past year I won Coach of the Year and had a kid make the junior all-star game. A lot of great things happened in that four-year span at Jim Hill.”

The whole time Lewis was making a name for himself in the coaching world, he was working behind the scenes to eventually transition out of it.

Lewis earned a masters degree is sports administration from Mississippi State before he started teaching. He said it focused mainly on running college, recreational and professional programs and not high school, however, so he went back to school.

“In the back of my mind I knew I wanted to get into high school athletic administration, so a few years ago I went back to Arkansas State University to get my specialist degree in educational leadership and administration,” Lewis said. “That did solidify me to become an administrator on the high school level.”

Earlier this summer, yet another door opened and Lewis stepped through it.

Preston Nailor, who had been the VWSD’s athletic director since 2016, left in July to take a job as an assistant principal at Velma Jackson High School in Madison County. Lewis jumped at the chance to not only move into administration, but to do it in his home school district.

After a few rounds of interviews with a panel of VWSD administrators, he was offered the job earlier this month.

“When hiring for the AD position, we were looking for someone capable and devoted to the safety, success, and growth of every child,” VWSD Superintendent, Chad Shealy said in a statement. “We believe we found that in James Lewis and are excited to welcome him in this important role.”

Lewis has been pulling double duty at Jim Hill and his new athletic director job for a couple of weeks. He said he wanted to feel out the nuances of the position before deciding how he’ll put his own stamp on it.

The VWSD, Lewis added, is in a unique position to be one of the best athletic departments in Mississippi.

Its two high schools, Vicksburg and Warren Central, compete in the higher classifications of the Mississippi High School Activities Association and their programs regularly make the playoffs. The school bond issue passed in 2018 has helped upgrade the district’s facilities, and an apparel deal with Adidas has been in place since 2017.

Lewis said it’s an athletics program that doesn’t require an overhaul or a rebuild, just a few pushes here and there to make it even better.

“There’s no such thing as rebranding. I just want to take it to another level,” he said. “When you go places and see Vicksburg High and Warren Central High, I think these are two of the top brands in the state of Mississippi.”

Lewis also said he hopes his personal story serves as an inspiration to some of the district’s students. He was thankful to everyone who helped him along the way, and is now hoping to pay it forward as he takes on a leadership position.

“It’s really been like a fairytale. Just trying to pinch myself and really understand that this is real,” Lewis said. “I thank God. I’m humble and gracious. To come from where I came from, I grew up in poverty, but pushed myself to want more for myself and my family.

“It shows that if you work for it you can achieve anything you want,” he continued. “I think that’s what I’m most excited about in this role, is to show kids that I came from the same community you’re from. If I can make it, I hope I can inspire these kids to know they can make it as well.”