LOOKING BACK: A little bit of history for a once-vacant lot 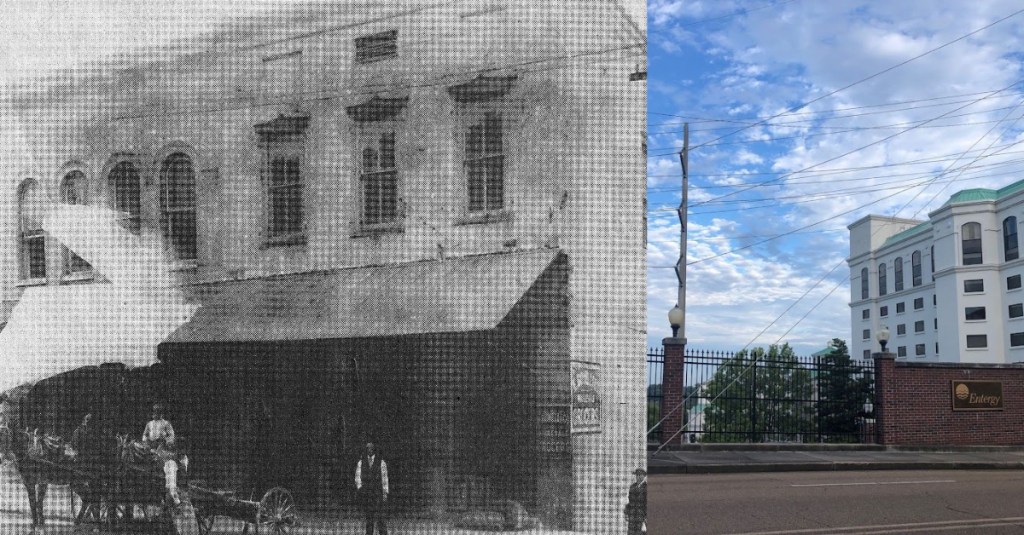 LEFT: The buildings that once stood at 1400 and 1402 Mulberry St. were home to a variety of businesses, primarily owned by the Bonelli family in their later years. RIGHT: Today, the site of 1400-1402 Mulberry St. is home to an Entergy substation. (Photos Submitted)

These two buildings at 1400 and 1402 Mulberry St. were located on the southwest corner of Mulberry and Crawford streets.

The building on the right was built before 1864 most likely and housed the William E. Gaunt Commission Merchant and Dry Goods Company in 1865 and 1866. A curious article in the Vicksburg Herald in December 1864, reported that when the reporter was passing by this building on Dec. 16, he “saw vast numbers of turkeys awaiting their destiny to furnish Christmas dinners. Not being fond of this inconvenient fowl, which is too much meat for one man, and not enough for  two, we did not inquire the price, but refer our readers to the merchant of the coops for information upon this subject.”

In 1867, S.H. Young and Company operated the same kind of business here, changing its name to Young, Bonham, and Mitchell in 1872, dissolving in 1873 with Young continuing there until he filed for bankruptcy later that year. Young’s ad in the Vicksburg Herald in December 1873 announced “to our friends and customers, owing to our late troubles brought against us by malice and spite we are unable to fill our numerous orders sent us. A full explanation with circular attached will explain to you our difficulty. Our suspension will be only temporary, and we hope when open again to merit hat patronage which you so liberally bestowed on us in the past.”

The building then housed McManus and Auter, also grocers. The building may have been used as storage for some intervening years, as I have been unable to locate renters. In November 1898, P.L. Hennessey and Brothers announced that Mrs. M.E. Genella had sold the building to Mrs. Bettie Willis.

Ten years later, Mrs. Willis sold it to Emile Bonelli who rented it to Brown Cotton Company. In June 1901, Bonelli built the building on the left and he moved his wholesale grocery business into both buildings, cutting a hole from the old building into the new building for access.

The Bonellis operated out of the building until about 1921, when the Emmich Brothers operated their grocery here, at least until 1924. In 1929, the building was vacant, but was once again used by a Bonelli in 1935 for their butcher’s supply and refrigerator company. In 1948, it was the Howe Warehouse.

The building was gone by 1959 and eventually, the Mississippi Power and Light (now Entergy) substation was built on the lot.