Eagles work on themselves following first loss of season 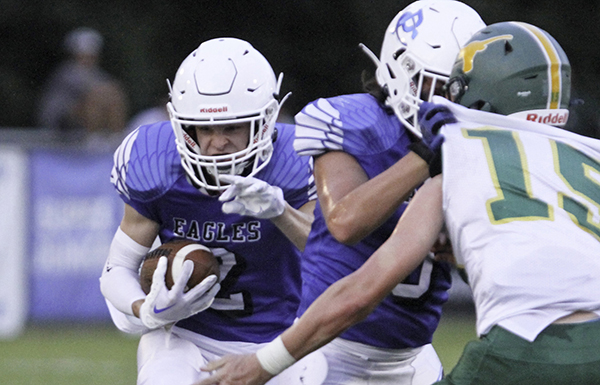 Porter's Chapel Academy's Taylor LaBarre (2) runs with the football last week against Manchester Academy. PCA will go on the road this Friday to Florence to play Discovery Christian. (Paul Ingram/For The Vicksburg Post)

In breaking down Porter’s Chapel Academy’s performance through two weeks, head coach Blake Purvis sounded a bit like he was leading a self-help seminar.

“This week we have to focus on ourselves. We have to do some soul-searching, and the focus has to be on what we can control,” Purvis said. “We’re not overlooking our opponent at all. But if we take care of ourselves the game will take care of itself.”

With one pretty good game, and one pretty bad one, under their belts, Purvis’ logic becomes clearer.

PCA split its first two games, cruising to a 52-12 victory over Kemper Academy in the opener before taking a 38-0 loss to perennial MAIS Class 2A power Manchester Academy last week.

The latter included not only a sloppy performance on the field, but some sideline squabbling among teammates that made it even less enjoyable. Putting both behind them was a primary goal for the Eagles this week.

“Can we just leave last week in the shadows and move forward?” Purvis said, with a mix of frustration and dark humor. “It’s a character-building week, a gut check, whatever you want to call it. We’ve got to find out who we are.”

Fortunately, the Eagles appear to have a perfect opportunity this week to work on themselves more than their opponent. Discovery Christian has been outscored 86-6 in its first two games, including a 52-6 defeat vs. the same Kemper Academy team that PCA beat by 40 points in its opener.

Discovery Christian fielded its first team in 2021 and has yet to win a game. Porter’s Chapel beat the Lions 70-6 last season, setting a school record for points in the process.

Purvis attributed some of Discovery Christian’s struggles to an overall lack of depth that is not uncommon for a young program. It’s not a major problem on his roster — or at least not as big of one as getting on a more even flow.

PCA still has playoff and even championship aspirations in MAIS Class 2A. The next two weeks could provide a natural lull in the schedule that gives the Eagles a chance to sort it all out.

PCA has an open date next week. Its original opponent, Claiborne Academy, canceled its season and Purvis has not yet been able to find a replacement.

“We have stuff to work with. We’re not sitting here with a roster of guys that are not capable,” Purvis said.