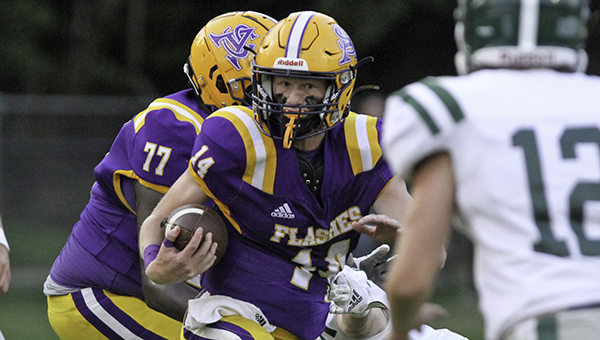 When they returned to practice on Sunday, two days after a tough loss to Centreville Academy, St. Aloysius coach Bubba Nettles said his players were visibly upset and angry.

The sight brought a smile to his face.

“I’m pleased with their bounce back from last week, because there were some hurting folks last Friday night — and that is what you want to see as a coach after a loss, is kids upset because they care. That’s a big deal,” Nettles said.

The passion to win shows that there is still plenty of optimism for the Flashes as they head into a big Week 3 matchup against Riverfield Academy (1-1).

It’s the MAIS District 3-4A opener for both teams, so it carries a little extra weight in the standings. It’s a chance for the Flashes to get back in the win column and pick up some needed power points before they hit a very difficult portion of the schedule in a few weeks.

“As many games as they’re going to win, because I know that they’re a good football team, that only benefits us. Getting that victory is as big as could possibly be,” Nettles said. “We have some big games between now and the first of October and we need to win several of them to really be thinking about playing at least an extra week in October.”

St. Al (1-1) has split its first two games, beating Park Place 12-0 while losing to Centreville Academy 8-0. The two low-scoring games have revealed a tough defense that can hold its own and make up for an offense that has been a bit sluggish to this point.

“Our defensive line and linebackers have really stepped up, with the Dowe twins (Will and Thomas) and Damien (Reeves) and Jax Oglesby. They’ve been huge,” Nettles said. “And Ahmad Stewart, at one of our dog safeties, has been big in run support out on the edge. I’m really pleased with how well Ahmad Stewart has come in, for not having played football since probably ninth grade.”

The offense, meanwhile, has struggled because of the absence of its best playmaker. Running back Padre Gray, who rushed for a team-high 900 yards and nine touchdowns last season, sprained his ankle early in the first quarter of the opener against Park Place.

Gray has yet to record a rushing attempt in 2022. He is, however, expected to return Friday against Riverfield.

Sophomore Thompson Fortenberry and junior Damien Reeves have picked up the slack — Fortenberry has 185 yards and one touchdown in two games, and Reeves has 97 yards and one TD — but don’t have quite the same explosiveness as Gray.

“Our offense is really built around our ability to pound the football. This week, finally having Padre back, he is our true home run threat,” Nettles said. “To have that back in our offense means the world to everything we try to do. Otherwise we are ground, pound, three or four yards and a cloud of dust.”

The loss to Centreville was difficult, Nettles said, because it was a winnable game. Centreville’s only touchdown came following a turnover at the 10-yard line, and St. Al had a touchdown of its own negated by a penalty.

The difficult loss on a muddy field, however, could wind up paying dividends. Nettles said it sparked some passion in his players to win again, and also prepared them for Riverfield from an X’s and O’s standpoint.

“We’re as ready as we’ll ever be. Last week was a slugfest, which absolutely prepares us for this week because Riverfield is very much the same mentality as Centreville,” Nettles said. “They’re going to line it up and try to pound it down your throat. If you stop it, congratulations. If you don’t, too bad. We are definitely mentally and physically prepared to take them on.”