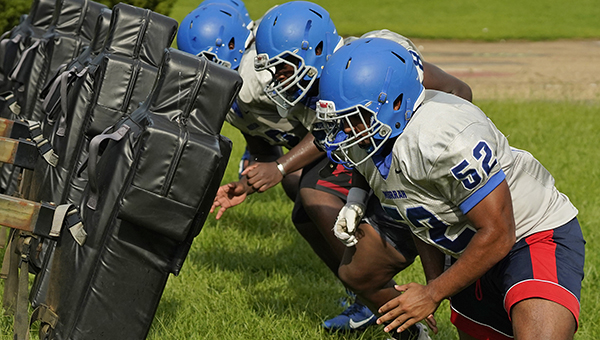 JACKSON (AP) — Marcus Gibson never realized how much water a high school football program used until it was gone.

Even so, he considers his team one of the lucky ones as a water crises roils Mississippi’s largest city.

The football coach at Murrah High School — right in the middle of Jackson, not far from the state capitol — says that his fieldhouse has about 40 to 50 cases of bottled water stacked along the walls thanks to players’ parents, administration and other benefactors. That should be plenty for his team to drink over the next few days at practice.

“Hydration isn’t much of a problem,” he said “It’s everything else.”

Many Jackson residents have been without running water in their homes and businesses this week because of breakdowns in the city’s main water treatment plant. Torrential rains caused the Pearl River to flood, exacerbating problems with pumps.

Jackson schools moved to online classes and canceled some of this weekend’s high school football games because of uncertainty about water. Some restaurants closed, while others are bringing in tankers of clean water from the suburbs. People are waiting in long lines to receive bottled water for drinking or non-potable water for flushing toilets.

Even before the water pressure dropped perilously low, Jackson’s water system was fragile and officials had warned for years that widespread loss of service was possible.

Now it’s happened — right in the middle of the hottest part of football season. While there are certainly more important things to worry about during a crisis, football is a staple of the state’s cultural identity. Coaches and players are trying to find ways to press forward, even in less than optimal conditions.

“We’re kind of used to it,” said Murrah receiver Christian Jackson before Wednesday’s practice. “After two years of COVID-19, we just make it work. You bring your own water to practice if you can and make the most of opportunities, because some of our practices have been canceled.”

Gibson said keeping everything clean is the biggest challenge. He said assistant coaches are working out plans to wash practice and game uniforms at laundromats outside the city or at any other place with enough water pressure.

Callaway High School coach Dameon Jones said he just takes his team’s clothes home and washes them himself since he lives a few miles outside of the city.

“We’re taking it one day at a time,” Jones said. “What I tell my kids — adversity is going to come. It’s how you’re going to deal with it.”

Murrah and Callaway are among four of the biggest city schools preparing to play in a “Graduation Classic,” which was originally expected to be at Mississippi Veterans Memorial Stadium. That was canceled earlier in the week due to the lack of water in Jackson, then on Thursday moved to Pearl High School. Murrah and Callaway will play Saturday at 11 a.m., and Provine plays Lanier at 3 p.m.

Three high school football games remained on schedule for Thursday and Friday nights, as of Wednesday.

“We will certainly have plenty of hand sanitizer and different things,” said Sherwin Johnson, executive director of public engagement for Jackson Public Schools. “Although our restrooms don’t have water, we are reserving and will have portable restrooms at each of our stadiums, enough to accommodate the crowds that we anticipate.”

Johnson added that no other sports were affected by the water shortage.

The inconveniences weren’t limited to high school sports. Jackson State football coach Deion Sanders said Tuesday that the water crisis left his players without air conditioning or ice at their practice facility. In a video that one of his sons posted to social media, Sanders said he wanted to move players into a hotel so they could shower.

Jackson State is scheduled to play Florida A&M on Sunday, in the Orange Blossom Classic in Miami. The Tigers left for South Florida on Thursday.

The make-do attitude is common these days around Jackson. Gibson and Jones — the high school coaches — said they’re still optimistic their games will be played.

“We’re just waiting to hear where the game is going to be,” Jones said. “Give us a time, a field and we’ll be ready.”