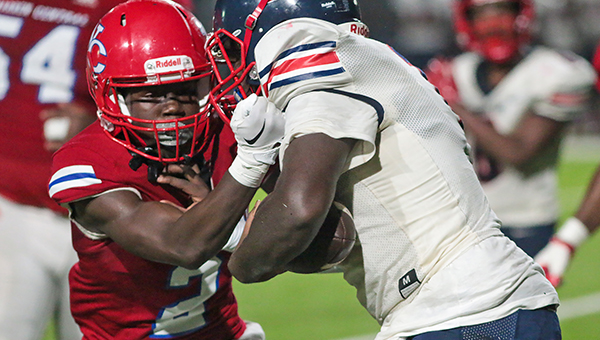 The annual football showdown between Vicksburg High and Warren Central has taken on a few nicknames over the years. The River City Rivalry. The Warren County Super Bowl. The simple, but descriptive, Vicksburg-Warren Central.

Warren Central head coach Josh Morgan, who has been involved in the rivalry in some capacity his entire life, had another description — fun.

“It’s the reason it’s a rivalry game. You want to win. You want to be your county champion. You want to control your area. That goes from your junior high to your high school. This is a big game,” Morgan said. “In this place you’re red or green, so it’s important not only to our football team but our community, just like it is to Vicksburg.

“It’s bragging rights, and I don’t know if there’s any better way to do it,” Morgan added. “This game is important. It’s not just another game. It’s a big game. We go to church with these people, we live with these people, and that’s what makes it fun.”

The series has been a lot more fun for Warren Central than for Vicksburg in recent years. Warren Central has won 10 consecutive meetings, with an average margin of victory of 24 points over the last eight.

The Gators, though, have closed the gap the past couple of seasons. Warren Central scratched out a tougher than it looked 17-0 win in 2020, and escaped with a 7-6 victory in 2021.

Vicksburg has nearly every starter back from last year’s team while Warren Central replaced most of theirs. So while Morgan likes to lean on his program’s tradition, he cautioned that it might not be wise to rely solely on it this week.

“There’s a trend there and a tradition, but that’s what teams in the past have done. This is a brand new team and a brand new year,” Morgan said. “That’s been the thing that we’ve tried to stress over the year, each and every year, that this is a new group and a new year and a new game, and we have to approach it and prepare ourselves the best we can to compete for four quarters because that’s what it’s going to take.”

Fortunately, the Vikings seem to have a bit more than tradition to rely on against the Gators.

Warren Central roared out of the gate with an easy 48-6 rout of Forest Hill in the Red Carpet Bowl, scoring 34 points in the first half before triggering the MHSAA’s new running clock mercy rule in the second.

It was a solid debut for a team with 16 new starters, but Morgan said there are still plenty of things to work on before the start of the Region 3-6A schedule in a few weeks.

“We wanted to improve from our jamboree to Week One. I think we were able to do that,” Morgan said. “It’s still early in the year and there is still so much improvement to make. That’s going to be our goal is to continue to get better every week. I feel like we got ready to play well and prepared well.”

And, of course, part of the process is finding a way to beat Vicksburg. Following the pageantry of the Red Carpet Bowl with another game that draws a big crowd and lots of local interest is a great way to start the season, Morgan said.

“Big game. A lot of passion. We’re looking forward to it, and the excitement,” he said. “This is your community game here, so the kids are awfully lucky to be able to play in games that have that kind of magnitude. It’s what makes it all fun.”