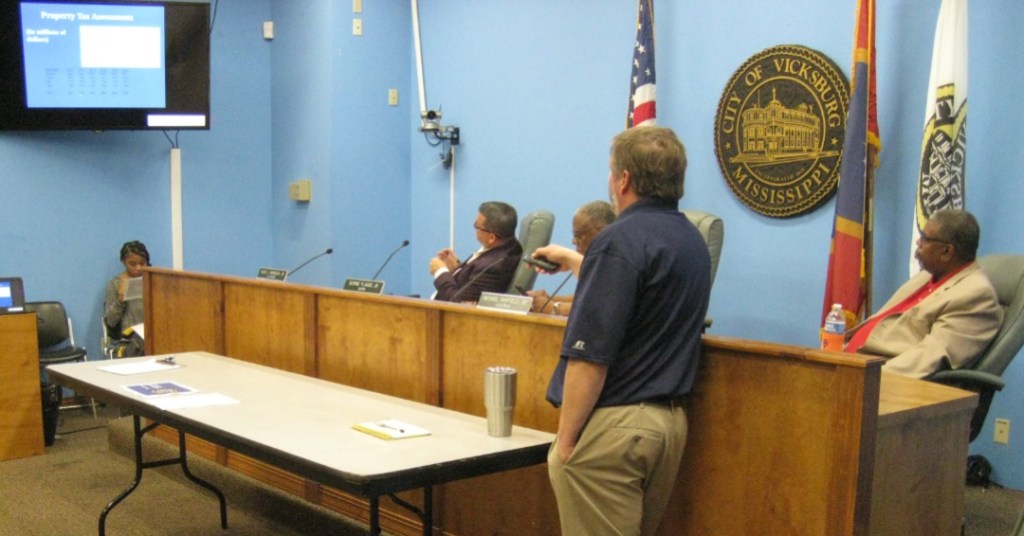 The Board of Mayor and Aldermen at a special meeting Wednesday approved a resolution to apply for a Mississippi Department of Environmental Quality Mississippi Municipality and County Water Infrastructure Grant to assist with the costs of improvements to the water treatment plant on Haining Road, repairs on Iowa Boulevard and to correct a drainage problem on Pemberton Square Boulevard. No amount has been requested.

The three projects have been previously discussed by the board.

The board in June approved a $261,600 agreement with a Texas-based engineering company for improvements at the Vicksburg water treatment plant that Mayor George Flaggs Jr. said should improve the plant’s capacity.

According to the proposal from Houston, Texas-based Trilogy Engineering, the project involves installing two parallel lines adjacent to two existing lines between the clarifier and filter; a backwash pump at the plant’s existing location and a new on-site groundwater well installation on the plant property.

When the report was presented, David Peters, senior project manager for Trilogy, said the plant has the capacity of treating up to 16 million gallons of water per day but the pipes carrying water to the plant’s clarifier, which is used to soften the water during the treatment process by mixing lime during the process, developed deposits and are constricted, reducing the plant’s maximum capacity to 10 or 11 MGD.

Flaggs at the time estimated the cost of the project at $2.1 million and said the improvements would increase the plant’s capacity “to about 21-22 million gallons a day.”

The board has also considered installing a new water tank on plant property.

The Iowa Avenue project involves repairing erosion problems and replacing two drainage culverts that were damaged because of erosion from heavy rains in January and April 2020.

The board on April 10 declared an emergency to repair the almost 40-year-old drainage problem on Pemberton Square Boulevard that goes back to the 1980s when the area was being developed during construction of the then-Pemberton Square Mall.

The problem involves two large drainage pipes connected to a smaller pipe, making it difficult to remove water from the area. Instead, the water backs up, causing a flood and blocking or slowing traffic from the Pemberton Plaza Shopping Center entrance near Goldie’s Express almost to Kroger. The project will replace the smaller pipe.