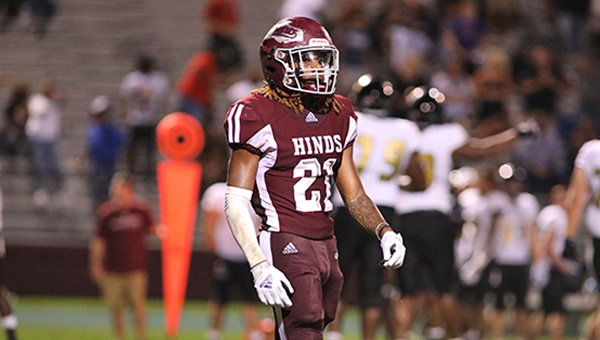 Guy Gillespie kicked two field goals, and Steven Edwards returned an interception 71 yards for a touchdown in the fourth quarter, as Northeast Mississippi Community College knocked off No. 7 Hinds 20-3 on Thursday.

Carter Putt threw an early touchdown pass for Northeast and finished 16-of-31 passing for 124 yards. The Tigers only had 176 yards of total offense, but held Hinds to 157 yards, registered four sacks and forced four turnovers.

Hinds’ only points came on a 32-yard field goal by Louie Gatlin midway through the second quarter. Quarterback Ruben Lee II was just 14-of-26 passing for 105 yards and threw two interceptions.

Jaylan Ware had seven tackles, including three tackles for loss, for Hinds. Trevell Vivians had two sacks and Ty’Verius Nichols had two interceptions.

Hefley’s 10-yard touchdown run with two minutes remaining was the game-winner for Northwest.

Gulf Coast quarterback Pat McQuaide was 25-of-46 passing for 275 yards and two touchdowns. He got the Bulldogs to midfield in the final seconds, but four straight deep incompletions ended the game.

Keymari Odum and Ramone Bradley each finished with 100-plus receiving yards for Gulf Coast, with Bradley bringing in 11 catches for 113 yards.

Pratt passed for 134 yards and ran for 28 as Pearl River overcame a 14-0 deficit at the end of the first quarter. Qavonte Swanigan rushed for 121 yards, while Nick Milsap ran for 95 yards and a touchdown.

Coahoma 52, East Central 28
Mekhi Norris san for 116 yards and a touchdown, and six players scored touchdowns for Coahoma Community College in a victory over East Central.

Jakobi Jackson added 64 rushing yards and two TDs for Coahoma, which ran for 298 yards as a team and 513 total yards. The Tigers scored 35 straight points after falling behind 20-3 in the late in the first quarter.

Jones College 44, Itawamba 0
Robert Henry scored four rushing touchdowns in the first half, and totaled 190 yards on the ground, as No. 11 Jones College routed Itawamba.

Ashton Nickelberry caught two touchdown passes in the third quarter for Jones. The Bobcats had 302 rushing yards as a team.

Damuriyon Montgomery who had 59 yards and two touchdowns on 12 carries for Southwest Mississippi.

Southwest held Delta to only 35 yards of total offense, finished with five sacks and had three takeaways. The Bears also blocked a punt, which Tyler Daniels returned five yards for a touchdown.

All of East Mississppi’s touchdowns came in the second half, after it led 3-0 at halftime.