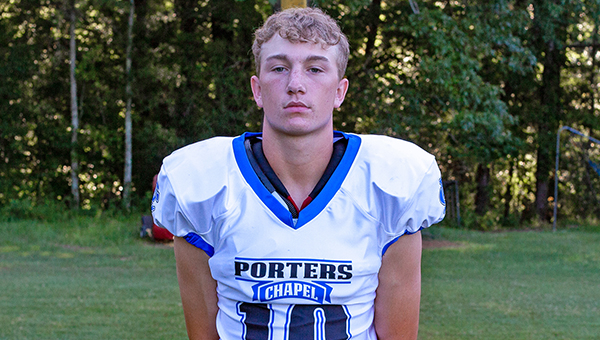 In the wake of an ugly loss last week, Porter’s Chapel Academy had a mission to get things back on track against struggling Discovery Christian.

Boy, was it accomplished.

John Wyatt Massey completed 10 of 15 passes for 225 yards and four touchdowns, and Porter’s Chapel rolled up 465 yards of total offense in a 60-0 victory over Discovery Christian on Friday night.

“I thought we did exactly what we wanted to do,” PCA coach Blake Purvis said. “We wanted to focus on ourselves and let the rest take care of itself, and that’s what we did.”

Massey threw touchdown passes of 22 yards to Ty Mack and 32 yards to Taylor LaBarre, while Jase Jung ran for touchdowns of 26 and 20 yards to put the Eagles ahead 28-0 at the end of the first quarter.
Massey added TD passes covering 66 yards to Noah Porter and 17 yards to Thomas Azlin to make it 46-0 at halftime.

“It was one of the best games John Wyatt has had passing the ball,” Purvis said. “It wasn’t just the yardage. The ball looked good coming out of his hand.”

Eight PCA players had a rushing attempt, but none had more than three. Jung’s two touchdowns were his only attempts. PCA totaled 244 rushing yards, and averaged 16.6 yards per play.

Six receivers caught passes as well, led by LaBarre with three receptions for 66 yards and one touchdown. Porter’s 66-yard TD was his only catch.

Discovery Christian only had 15 total yards, and PCA forced three turnovers. Gavin Pugh had an interception, and Rutland had 4.5 tackles.

“They ran 31 plays for a total of 15 yards. No doubt the defense did outstanding,” Purvis said.

Purvis added that he was happy to give all of his players some playing time in the blowout. PCA has an open date next week, at least for now. Its scheduled opponent, Claiborne Academy, canceled its season and Purvis has been unable to find a replacment although he is still trying.

The good vibes from a big win should carry into an open date, or whoever the next opponent is.

“We played all 20-something-odd guys. Everybody we put in just continued to make plays,” Purvis said. “We were still getting stops on defense with our younger guys, and having success on offense in the second half with the younger guys or guys who don’t normally play on offense. It was good to see we could roll that many guys in there and didn’t see a dropoff.”