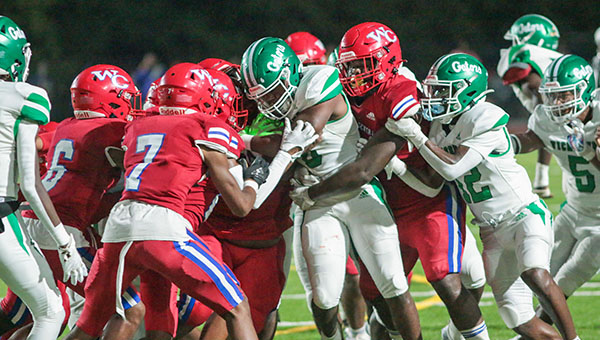 Warren Central's defense stacks up Vicksburg High running back Malik Montgomery on a play at the goal line in the second quarter of Friday's game. Warren Central beat Vicksburg, 20-18, for its 11th consecutive win in the River City Rivalry series. (Walter Frazier/For The Vicksburg Post) 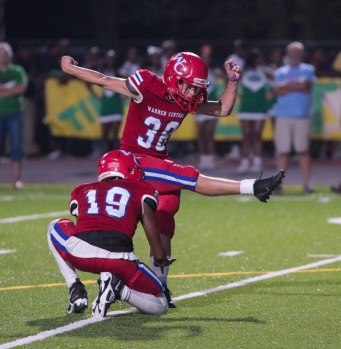 Warren Central freshman kicker Jonah Artman kicks one of his two field goals in a 20-18 victory over Vicksburg on Friday. (Walter Frazier/For The Vicksburg Post) 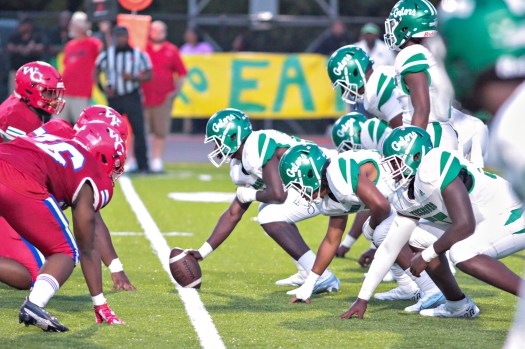 Vicksburg High and Warren Central football players wait for the snap before a play in Friday's game. (Walter Frazier/For The Vicksburg Post) 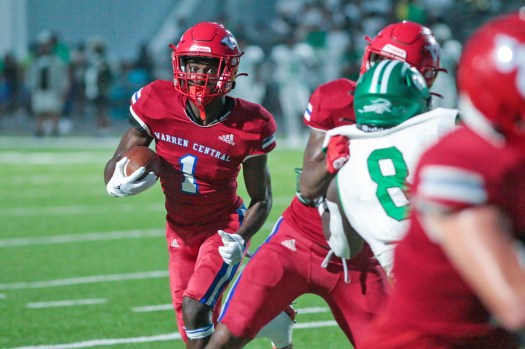 Warren Central running back Trey Hall (1) carries the football Friday against Vicksburg. Hall ran for 40 yards and a touchdown in the Vikings' 20-18 victory. (Walter Frazier/For The Vicksburg Post)

With cars lining Highway 27 and a sellout crowd of more than 5,000 fired-up fans packing the bleachers on either side of Viking Stadium, the latest edition of Vicksburg-Warren Central was a throwback to the glory days of the rivalry.

The Gators and Vikings gave everyone an ending they’ll talk about for years, too.

DeCorey Knight turned a short pass into a 54-yard touchdown with 29 seconds left to pull Vicksburg within two points, but Warren Central’s defense stuffed the two-point conversion attempt and the Vikings escaped with a 20-18 victory on Friday.

“It was a good football game. Two teams that you can tell it meant a lot to them and they were fighting for it,” Warren Central coach Josh Morgan said. “I thought the game was very competitive from the very beginning, and it’s what’s good about football.”

Warren Central (2-0) beat Vicksburg (0-2) for the 11th consecutive time. The last two have been decided by a total of three points, after the previous seven had an average scoring margin of 28 points.

“I’m very disappointed in the loss. The kids played hard. I may have to do some things differently and go back to the drawing board, but I’m proud of the way we played,” Vicksburg coach Todd McDaniel said. “We’re still making too many mental mistakes, but not as many as last week. Hats off to Warren Central. They’re a very good football team.”

Every time it looked like Warren Central might have taken control of the game, Vicksburg answered to close the gap.
Warren Central scored on its first two possessions of the second half, getting a 50-yard touchdown pass from Jack Wright to Zach Evans and a 33-yard field goal by freshman Jonah Artman to take a 17-6 lead with 2:04 left in the third quarter.

“It gave us a big jolt,” Wright said of the touchdown. “It gave us all the momentum, and momentum is everything in a football game — especially in the second half when it’s that close.”

Vicksburg’s Nicholas Mickey returned the ensuing kickoff 92 yards for a touchdown, however, to cut it to 17-12 following an unsuccessful two-point conversion pass.

Artman booted another field goal, from 28 yards, to put the Vikings ahead 20-12 with 55 seconds left in the game and seemingly seal it up.

It only set up a wild finish, though.

On second-and-2 from the VHS 46-yard line, Gators quarterback Ronnie Alexander completed a short pass to Knight just past the left hash. Knight started to head out of bounds, then cut it back toward the middle of the field. He juked two defenders and outran the rest, and wasn’t tackled until he was just across the goal line.

“That can’t happen, but it did happen,” Morgan said. “We felt like we were in the right defense and got outflanked. The corner fell down and the guy made a good play.”

With the Gators needing a two-point conversion to tie and force overtime, Morgan called a timeout to settle his defense.
It worked.

VHS running back Malik Montgomery tried to take a handoff around the left side, but the Warren Central defense broke through the line. Several defenders took Montgomery down in the backfield to keep the score at 20-18.

“We called timeout when we saw the formation that they’d be in and settled up and told them to forget about it. The next play is the biggest,” Morgan said. “We put ourselves in a good position, and our players made the play.”

Vicksburg was unable to recover the ensuing onside kick, and Wright took a knee to end an entertaining defensive slugfest. Neither team cracked 200 yards of total offense.

Knight finished with 118 total yards, on that one reception and 11 rushes for a team-high 64 yards. Montgomery had 30 rushing yards and a touchdown for Vicksburg.

Trey Hall had 40 rushing yards and a TD for Warren Central, and Darius Carter gained a team-high 56 yards on the ground.

“It feels amazing,” said Wright, who completed 5 of 8 passes for 68 yards and the one touchdown. “I was feeling confident going in, and then after that first half we were trying to make up a plan. We came out and threw the ball one time, we got rolling and we finished strong.”

Morgan said the competitive game and festive atmosphere was a great showcase for two teams with high hopes for this season, as well as for the entire city and county.

“It’s good for our community, I think across the board. We’ve got some good ball around here and some good players around here,” Morgan said. “It was just a great thing to see out here. Both of these teams are going to do really well throughout the year.”