Bulldogs, weather light it up in season-opening win over Memphis 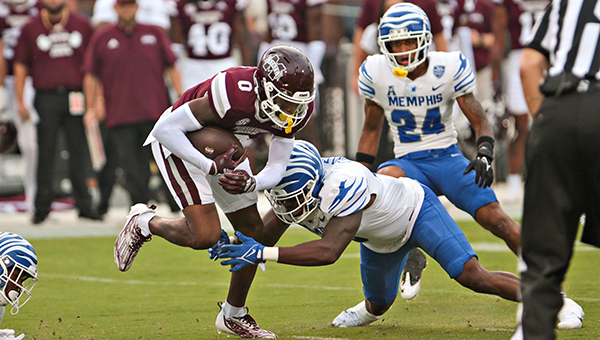 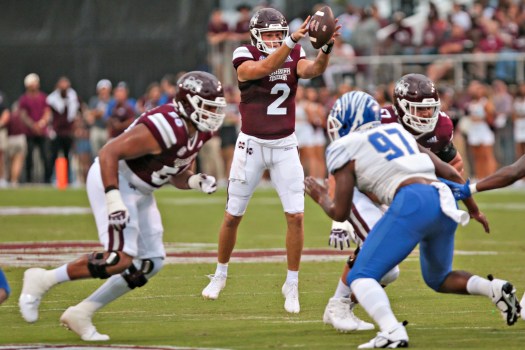 Mississippi State quarterback Will Rogers (2) takes a snap during the season opener against Memphis. (Walter Frazier/For The Vicksburg Post) 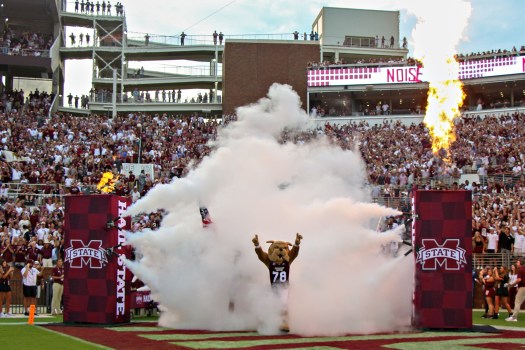 Mississippi State's mascot Bully emerges from the tunnel before the start of Saturday's season opener against Memphis in Starkville. (Walter Frazier/For The Vicksburg Post) 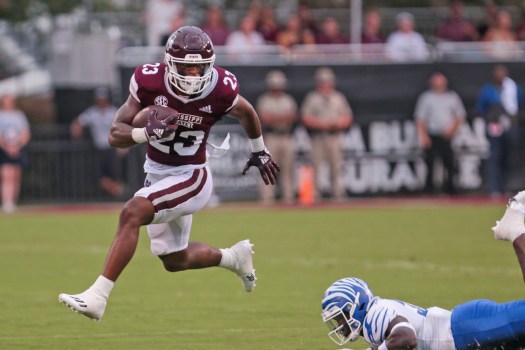 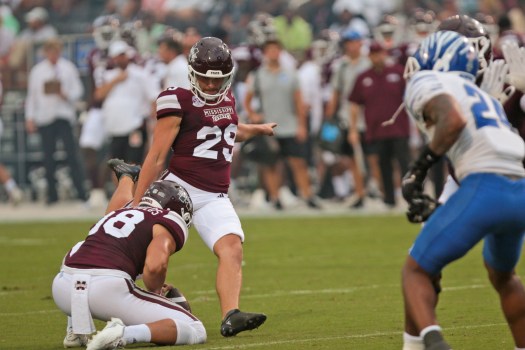 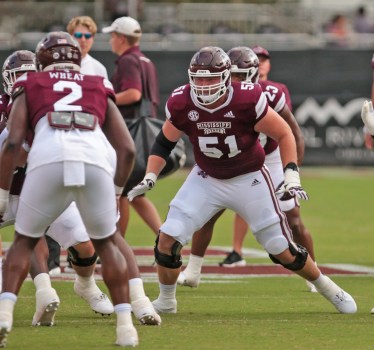 STARKVILLE (AP) — An electric atmosphere and hyped-up Mississippi State team was diminished a bit in game one of the 2022 season — to no fault of the Bulldogs.

After lightning struck offensively and defensively from MSU’s units in the first few minutes of the game, literal lightning halted play for nearly three hours. The Bulldogs regrouped and made a late night memorable in a 49-23 victory over the Tigers.

“I was kind of impressed with the way we played for an opener. The biggest thing is we have to play a complete game. I was proud of the way that we came out and played after the delay,” Mike Leach said. “I thought we handled (the lightning delay) better than expected.”

Led by Bulldog quarterback Will Rogers, Mississippi State outgained the Tigers 542-294 with the bulk of the Tigers’ yards coming in the second half. Rogers was 38-of-49 passing for 450 yards, five touchdowns and an interception. It was the 14th time in his three-year career that he’s notched over 300 yards and his sixth 400-yard game.

The 450 yards was Rogers’ most as a Bulldog and Leach was impressed with the composure that he had in the pocket.

MSU’s defense dominated for 2 1/2 quarters. The Bulldogs gave up two first downs in the first seven possessions and had allowed just 40 yards midway through the third quarter. It wasn’t until running back Jevyon Ducker broke off a 50-yard run later in the third quarter that Memphis broke 100 yards of total offense.

Memphis scored on each of its final three drives to cut into Mississippi State’s 35-3 lead and cut it to 19, but the game never was close. Sophomore quarterback Seth Henigan threw for 165 yards on 19-of-30 with a touchdown pass.

Rogers completed passes to 12 receivers and four caught five or more passes each. His five TD passes all went to different receivers.

Rara Thomas was one of those who got a chance to show what he could do at receiver. The sophomore had five catches for 81 yards, including a touchdown on the first drive. He had three catches in the series as MSU took a 7-0 lead.

Midway through the first quarter, lightning struck about eight miles from the stadium and sent the two teams into the locker rooms. It was after 9 p.m. when the game finally resumed, and it didn’t end until 12:07 a.m.

What might have been one of the bigger surprises in the game was the Bulldogs’ willingness to run the football. MSU threw for 450 yards on those 49 attempts but also ran it 34 times for 97 yards. The two starting backs, Jo’Quavious Marks and Dillon Johnson, ran 28 times for 103 yards. Marks had two short rushing touchdowns, both in the second quarter.

Mississippi State will have another late night next week when it goes on the road to play Arizona. The game will begin at 10 p.m. on Sept. 10, and be televised on FS1. Arizona beat San Diego State 38-20 in its opener on Saturday.