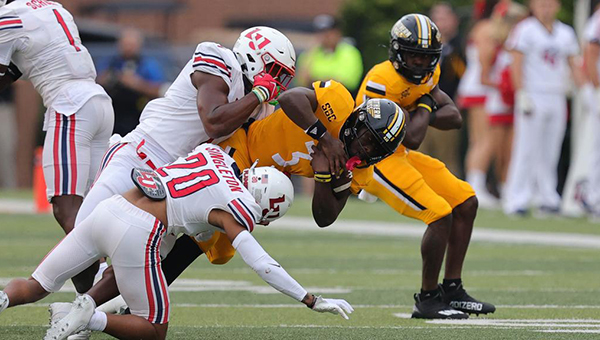 Liberty drove down the field for a game-tying touchdown in the final minute of regulation, then stopped Frank Gore Jr. on a two-point conversion play in the fourth overtime to beat Southern Miss 29-27 in the season opener on Saturday.

It was the longest overtime game in Southern Miss history, and one of the most disappointing in recent memory. Gore scored on a 5-yard run with 1:54 left in the fourth quarter to put Southern Miss ahead 24-17, but the Golden Eagles couldn’t hold on.

“We had our opportunities, and we didn’t get it done and that is on me as a coach, that is on us as a program
as we continue to grow,” Southern Miss coach Will Hall said. “The good thing is that a year ago that team would have blown us out. They are a good football team, and we went toe-to-toe with them physically and it is sickening that we didn’t win.”

Gore ran for 178 yards and two touchdowns on 32 carries, and also led the Golden Eagles’ offense by playing quarterback for the entire second half.

Starting quarterback Ty Keyes was knocked out of the game with an injury in the first half, prompting Hall to switch to the “Superback” offense that the team used to great success last season.

It worked well this time, too, as the Golden Eagles finished with 252 rushing yards. Gore was 1-for-4 passing for 48 yards. Keyes completed 4 of 8 passes for 89 yards, and threw two interceptions, before his injury.

“We decided to go with our Superback stuff, and we just felt more comfortable with that with how Liberty was playing us,” Hall said. “Having Frank back there gave us a jolt offensively where we were able to score us some points.”

After Gore’s late touchdown run, Liberty drove down the field in the final two minutes to tie it. Kaidon Salter threw a 23-yard touchdown pass to Demario Douglas with 36 seconds left, and the PAT tied it at 24.

Salter, who was one of three quarterbacks that Liberty used, was 8-of-13 passing for 148 yards and two touchdowns, and also ran for 65 yards. Salter threw one interception that was returned for a touchdown by Eric Scott early in the fourth quarter.

Each team missed a field goal in the first overtime period, then made one in the second. USM’s Briggs Bourgeois kicked a career-long 53-yarder to tie it at 27.

On Southern Miss’ possession, Gore was stuffed at the 1-yard line on a run to end the game.

“We ran the play a couple of times and they shifted the backers over. I tried to hit a little crease to get two yards and they grabbed me. It’s all good,” Gore said.