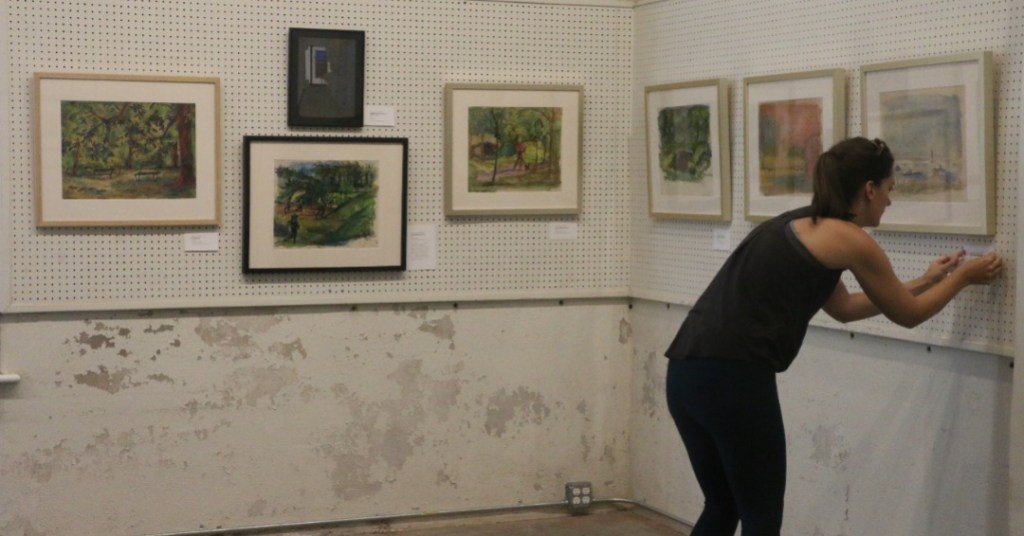 Vicksburg’s own, Andrew Bucci, would have celebrated his 100th birthday this year, and in honor of the artist, whose career spanned nearly 80 years, a year-long centennial celebration is underway, which includes an art exhibition at the Old Constitution Firehouse Gallery, 1204 Main St.

The exhibition will run Sept. 3 through 25 and the gallery will be open from 10 a.m. until 4 p.m. Wednesdays through Saturdays and from 1 to 4 p.m. Sundays.

In conjunction with their membership drive, the Vicksburg Art Association will also be holding a reception at the gallery beginning at 7 p.m. Sept. 13. The public is invited to attend.

Bucci’s niece, Margaret Bucci, who is a Vicksburg native, said three exhibitions are scheduled throughout the year and represent different aspects of her uncle’s career.

Margaret said the Vicksburg exhibition is particularly special because, “It is all work on paper which was Andrew’s preferred medium.” The exhibition is titled “In His Element: Andrew Bucci’s Explorations of Place.” The art, she said, features a selection of on-location landscapes depicting scenes of Vicksburg and many other places throughout the U.S. where Bucci lived, worked, and traveled.

In addition to the exhibition showcasing Bucci’s landscape drawings and cityscapes, Margaret said the artwork will also display the evolution of Bucci’s artistic vision.

“You get a good idea of not only the places he lived and worked, but how his eye evolved over his life and how his style changed,” she said.

Serving as curator for the centennial celebration is Elizabeth (Lizzie) Abston, who is the daughter of Vicksburg natives Edley and Brenda Ware Jones.

Margaret said Abston has also been a consultant to the Bucci estate and she has played an important role in helping with events to celebrate the centennial.

“Lizzie has done a phenomenal job of selecting works that show a range of his (Bucci) talent and how it evolved,” Margaret said.

Since a large part of the Vicksburg exhibition is of local scenery, VAA co-president Jean Blue said, “It’s really befitting the show came home to Vicksburg,” adding, the VAA feels honored to have been chosen as one of the three venues selected for the exhibition.

“We are extremely grateful to the Bucci family for selecting Vicksburg as one of three sites,” Blue said.

The other two Bucci exhibitions that are being held this year are “Andrew Bucci: Fashion Forward” which will run through Oct. 30 at the Lauren Rogers Museum of Art in Laurel. The exhibition features Bucci’s sketches made at the Académie Julian, class projects and notebooks from his study at Parsons, and vibrant figurative drawings from the 1960s.

The final exhibition will run from Sept. 29 through April 2 at the Walter Anderson Museum of Art in Ocean Springs and is entitled “Andrew Bucci: Landscapes in Pattern and Color.”

Bucci was born in Vicksburg on Jan. 22, 1922. He graduated from St. Aloysius College (High School) in 1938 at the age of 16. During high school, he took art lessons from Mary Clare Sherwood at All Saints College in Vicksburg.

Bucci graduated from Louisiana State University in 1943 with a major in architectural engineering. Following graduation, he was accepted in the Army Air Force’s weather officer training program at New York University and during WWII he drew weather maps for the 18th Weather Squadron.

Bucci returned to Vicksburg in 1946 and joined the staff of the U.S. Weather Bureau.

Bucci’s military training in meteorology led to a career with the National Weather Service near Washington, D.C., where he settled in 1956, all while continuing to have a presence in the Mississippi art scene.

Bucci moved to Fort Washington, Maryland, in 1972 and retired from the National Weather Service in 1979. In 1983, he was artist in residence at Delta State University in Cleveland for the fall semester and continued painting, drawing and exhibiting artwork in museum and gallery exhibitions for the remainder of his life.

In 2009, Bucci received a Governor’s Award for Excellence in the Arts for lifetime achievement in the visual arts from the Mississippi Arts Commission and Gov. Haley Barbour. In 2012, he received a lifetime achievement award from the Mississippi Institute of Arts and Letters. His painting “Figure in Green” was selected as the signature image for the 2014 USA International Ballet Competition.