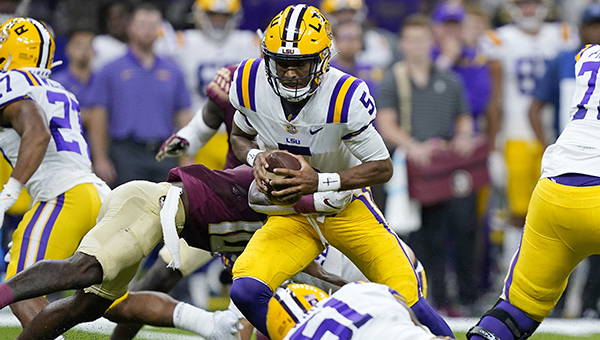 LSU quarterback Jayden Daniels (5) tries to escape the grasp of Florida State defensive back Jammie Robinson in the first half of Sunday's game in New Orleans. (AP Photo/Gerald Herbert)

NEW ORLEANS (AP) — A play as unlikely as a blocked extra point with no time remaining made Florida State quarterback Jordan Travis’ highlight-filled performance stand up — and spared Seminoles coach Mike Norvell from having to endure an ignominious collapse.

“Obviously, there at the end, you know, we had some things that happened that we just can’t have,” said Norvell, who has Florida State off to its first 2-0 start since 2016. “But the one thing that happened on the last play is what we absolutely need.”

LSU’s improbable comeback bid came despite a slew of mistakes, including a muffed punt with 2:15 left.

Florida State’s Treshaun Ward fumbled at the LSU 1 with 1:20 to go, and Tigers quarterback Jayden Daniels drove LSU for a touchdown on a 2-yard pass to Jaray Jenkins with no time left.

With LSU fans celebrating an apparent two-touchdown comeback in the final 4:07 — and Florida State fans bracing for what could have gone down as an infamous implosion — Brown’s block sent the Seminoles streaming triumphantly onto the field. Brown came off the left side of the line and deflected the kick, which still cleared the line but hit the crossbar.

“I just had a big smile on my face and a couple of tears thinking about how much we have been through as a football team,” said Travis, who passed for 260 yards and two touchdowns. “To end the game like that is really special. The game really shouldn’t have been that close from the jump. But a win is a win.”

Travis’ scoring passes came on a 39-yard throw to Ontaria Wilson on a flea flicker and a 27-yard pass that Wilson corralled with one hand. Travis also rushed for 31 yards on a combination of designed runs and scrambles, repeatedly leaving LSU pass rushers grasping air as he spun or darted away from pressure.

“We had him dead to rights on two or three occasions and we didn’t get him on the ground,” Kelly said. “When you don’t get that kid on the ground, he makes some really good impromptu plays.”

Tens of thousands of garnet and gold-clad spectators helped sell out the Superdome and left happy after Florida State — coming off four straight losing seasons — prolonged a promising start to Norvell’s third season.

This game was arguably more meaningful to Norvell than Kelly, who was lured from Notre Dame with a decade-long, $100 million contract designed to give him time to remake LSU football in his image.

Daniels, a transfer from Arizona State, started after a tight competition in camp with Garrett Nussmeier. He completed 26 of 35 passes for 209 yards and two TDs, both to Jenkins. Daniels also rushed for 114 yards.

Another transfer, running back Noah Cain (from Penn State), scored LSU’s first touchdown from a yard out on fourth down late in the third quarter to make it 17-10.

Travis marched the Seminoles right back to the end zone, highlighted by a 15-yard completion to Johnny Wilson as the elusive QB jumped away from closing defenders. DJ Lundy finished the drive with a 1-yard TD run to make it 24-10 with 9:04 to go.

LSU took its only lead, at 3-0, on its first possession. But that drive stalled shortly after Garrett Dellinger, in his first game at center, snapped the ball over Daniels’ head on second and goal from the FSU 5.

FSU’s lead was 7-3 at halftime after both teams blew red-zone opportunities.

LSU’s line didn’t look ready when the ball was snapped on a field goal attempt, and Jared Varse knifed in to block Ramos’ kick.

The Seminoles couldn’t cash in on Malik Nabers first of two muffed punts, which Florida State recovered on the LSU 16. Norvell kept the offense on the field on fourth and 2 from the 8, and Travis’ pass to the far corner of the end zone fell incomplete.