Sports column: Charting the changes for this football season 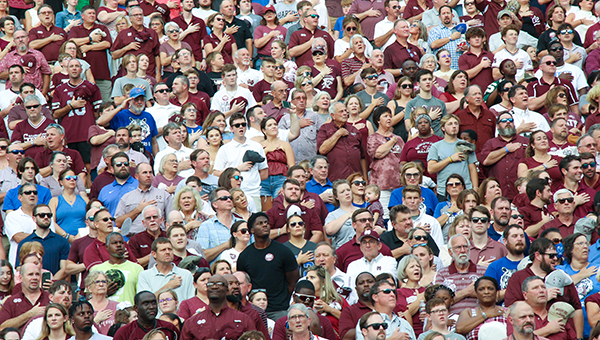 Mississippi State fans stand at attention during the playing of the National Anthem before the start of Saturday's football game against Memphis at Davis Wade Stadium in Starkville. (Walter Frazier/For The Vicksburg Post)

The 2022 football season is here at last.

Mississippi’s high school teams are in Week 2 — or Week 3, depending on which association you follow. College football started last weekend, with about a dozen Week Zero games. A full schedule this weekend has already begun. Week 1 of the NFL season begins next Thursday.

With all of the pigskins flying around, it seemed like a good time to check on a few of the changes fans might notice this season. It was a busy offseason in the board room:

• The MHSAA will start games at 7:30 p.m. during the early part of this season, 30 minutes later than had been the standard for about a decade. The later start is intended to curb heat-related injuries in August and September, when it’s about 90 degrees for a 7:30 kickoff rather than 92 at 7 p.m.

The start time will return to 7 p.m. beginning in October.

• Even with the later starts, some games will have earlier finishes thanks to the MHSAA’s adoption of a mercy rule. If any team is ahead by 35 points or more after halftime, a running clock will be used.

The MAIS has used the same system for a number of years, and in some MHSAA blowouts coaches and officials would agree to it on the fly. This will be the first time the association has had it as a mandatory rule, however.

We’ve already had one local invocation of the mercy rule. The Red Carpet Bowl game between Warren Central and Forest Hill zipped through most of the second half as Warren Central was rolling to a 48-6 win.

• Most FBS and FCS games are now streamed as well as televised. If you don’t see a game in the listings, fire up ESPN+ or Stadium or any of a dozen team-specific sites and you’ll probably find it. Southern Miss will be on ESPN+ five times this season.

• There is now an NCAA rule against faking injuries to slow down opposing offenses, but it does not carry an on-field penalty. Instead, conferences and schools will submit reports — in triplicate, with yellow and pink copies, presumably — to decide what, if any, punishments to levy on the offenders after the fact.

• The NFL overtime rules have been changed again. In playoff games, both teams will get at least one possession in overtime unless the first possession results in a defensive safety or touchdown. Previously, the team receiving the overtime kickoff could win by scoring a touchdown.

So if your favorite team scores a touchdown in overtime, don’t get too excited. At least the NFL rules aren’t as bad as the ridiculous college two-point conversion shootout system — at least not yet.

That’s the big stuff to be aware of. There are some other tweaks you’ll pick up as we go. Now let’s play some football and have some fun out there.