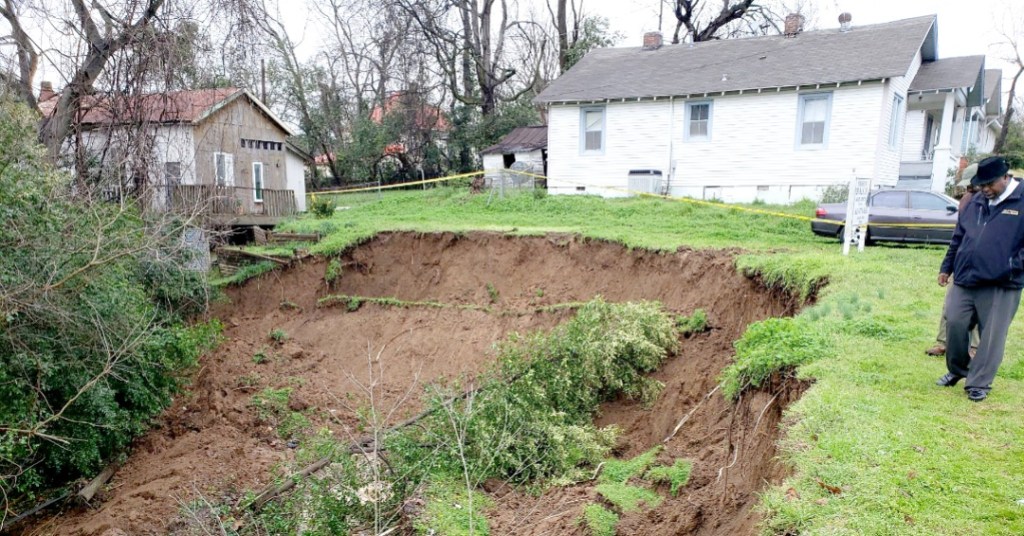 In this file photo, Ward 1 Alderman Michael Mayfield examines the damage caused by a slide that took a large portion of a lot between 1108 and 1114 Farmer St. after heavy rains in April 2020. The Board of Mayor and Aldermen received a bid of $500,645 to repair the slide and another problem on Clover Lane. File/The Vicksburg Post

A Vicksburg contractor was the lone bidder on a project to repair erosion damage on Farmer Street and Clover Lane.

Central Asphalt’s bid of $500,645 was received by the Board of Mayor and Aldermen and then taken under advisement.

The project will be paid for in part by a $487,354 Natural Resources Conservation grant, which was based on an NCRS total project estimate of $617,406. The grant helps cover 75 percent of the eligible engineering and construction costs.

Farmer Street and Clover Lane were affected by serious erosion problems caused by heavy rains in January and April 2020.

The erosion on Clover Lane involved a slide in a drainage area, while on Farmer Street, a large section of a lot between 1108 and 1114 Farmer St. broke off and cascaded down on a dead-end section of China Street covering a car on China with trees.

Clover Lane and Farmer Street were two of nine projects involving erosion problems that were submitted to the Federal Emergency Management Agency by the city for emergency grant money.

The other areas included Riverfront Park, James E. Sturgis Sr. Street, Crestline Lane (street), Greenhill, a culvert on Crestline Lane and a culvert near the intersection of Iowa Boulevard and U.S. 61 South near McDonald’s and the City Park project to replace a damaged walking trail and replace fencing.

When FEMA did not approve Clover Lane and Farmer Street for emergency funds, city officials applied for the NRCS funds. The board in February approved taking a $4 million short-term loan to begin repairs at some of the slide areas while waiting on the federal money. The loan will be repaid with federal funds.

In a related matter, the board adopted a resolution declaring an emergency for the repair of Iowa Avenue.

The Iowa Avenue project involves repairing erosion problems and replacing two drainage culverts that were damaged because of erosion from heavy rains in January and April 2020 and are affecting the street.

The board at a special called Aug. 31 meeting approved a resolution seeking a state Mississippi Department of Environmental Quality Mississippi Municipality and County Water Infrastructure Grant to help pay for emergency repairs to the problem. FEMA funds will be used to help pay for a permanent solution.