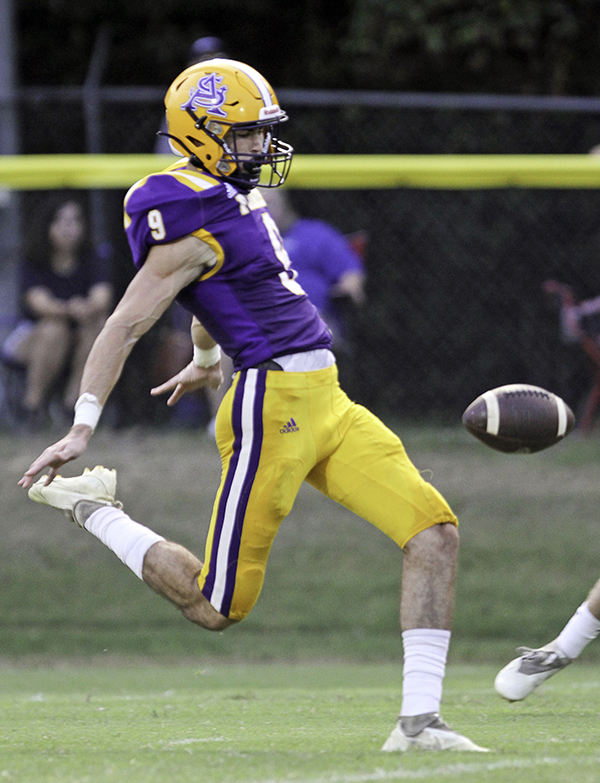 St. Aloysius' Jake Brister punts the football during last week's game against Riverfield. Brister is averaging nearly 50 yards per punt through the first three games of the season. (Paul Ingram/For The Vicksburg Post)

Whenever he comes on the field to punt, St. Aloysius’ Jake Brister takes a look at the opponent’s coverage and smiles.

“A lot of times I see the return man up close and I’m like, ‘I’m going to send it over his head,’” Brister said with a laugh.

Most times, he does just that.

The senior’s booming leg and pinpoint control have become a potent weapon for the Flashes in helping to control field position.

“Riverfield’s coach texted me the other day. He was watching our film and said he was going to scan over special teams and then he saw our punter. He asked, ‘Coach, where did you get that punter!?” St. Al coach Bubba Nettles laughed. “I told him I found him in a ditch.”

Brister’s path to punting actually started on the baseball diamond. He once had aspirations of playing college baseball, until a shoulder injury took him out of that sport.

He came to the football team last year with the intention of punting, but was soon enlisted to play wide receiver and tight end.

At 6-foot-4 and a little over 200 pounds, his size was too good for Nettles to waste solely on special teams.The only problem was that he had told his mother he would only be a punter.

“I had to keep that a secret for a while. Every day I had to go home and tell her I was just punting,” Brister said.

She eventually found out, and now others are as well. He’s starting to gain some interest from college programs and has traded his dreams of playing baseball for ones of football glory.

“I started kind of late so I haven’t gotten any looks yet. But I’m probably going to find somewhere to play. I definitely want to take it to the next level,” Brister said.

To help get there, Brister said he worked hard on his craft during this past offseason. He attended a camp led by Devon Bell, a former Warren Central and Mississippi State punter, and learned how to control his kicks as well as boom them.

In a Week 2 game against Centreville Academy, he had a punt downed at the one-inch line after it landed and spun backward to keep it out of the end zone.

“I’ve always been able to kick it far, but I really had no form. So I went to a camp this summer overseen by Devon Bell and ever since then I’ve been training and took it to the next level. I’ve been consistently hitting 50-, 60-yard punts,” Brister said. “I’ve been putting them inside the 10. I think every single ball has gone 50 or 60 yards and the rest I’ve kept inside the 10-yard line.”

Brister said he enjoys hearing the crowd ooh and ahh when he unleashes a long punt. But as for results, he’s just as happy with a pooch kick that pins an opponent deep.

“A bomb is really cool for myself to experience. I get hyped up over that,” he said. “But for the team it’d probably be putting it inside the 10 because that helps the defense a lot.”