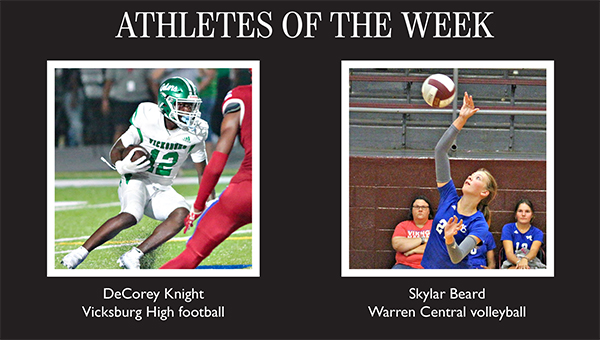 The Vicksburg Post’s inaugural Athlete of the Week contest wound up crowning the Athletes of the Week.

Porter’s Chapel Academy football player John Wyatt Massey was third in the voting, with 195 votes, and St. Aloysius cross country runner Samantha Edwards was fourth with 78. A total of 1,069 votes were cast.

Knight, a sophomore running back for Vicksburg, had 118 total yards in a 20-18 loss to Warren Central last Friday night. Knight ran for a team-high 64 yards on 11 carries.

The rest of his yardage came in the final minute of the game, when he turned a short pass into a 54-yard touchdown to pull the Gators within two points. A two-point conversion try was no good, and the Gators were unable to pull out the win.

The Post’s Athlete of the Week contest will continue throughout the high school athletic year. Four nominees will be selected based on their performances from the previous week.

Voting will begin on Sunday evening and continue until midnight Tuesday each week, and links will be posted on our Facebook and Twitter (@vixpostsports) pages. Follow us for updates and more news.

Thank you to all of our readers who voted, and congratulations to the winners!