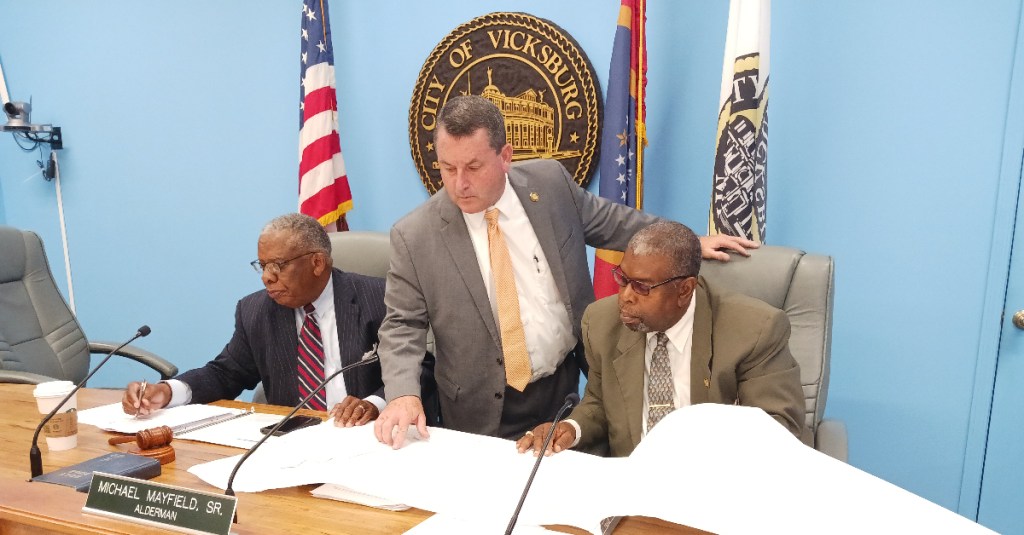 Mayor George Flaggs Jr., left, Ward 2 Alderman Alex Monsour and Ward 1 Alderman Michael Mayfield review plans for a proposed liquor store and laundromat at a building at 2600 Halls Ferry Road during an appeals hearing Tuesday. The board took the matter under advisement. (Photo by John Surratt | The Vicksburg Post)

A Vicksburg businessman seeking to have a piece of property on Halls Ferry Road in Marcus Bottom rezoned so he can open a liquor store and laundromat will have to wait for a decision by the Board of Mayor and Aldermen.

The board Tuesday took the appeal by business owner Sukhbeer Singh to rezone the property at 2600 Halls Ferry Road from C-1 neighborhood commercial to C-3 central business district and open a part liquor store, part laundromat at the property.

Singh presented his request to rezone the property to the city’s Board of Zoning Appeals, which denied the change at an Aug. 3 public hearing, saying he failed to prove the character of the neighborhood had changed to justify the C-3 rezoning, forcing Singh’s appeal to the Board of Mayor and Aldermen. Mayor George Flaggs Jr. would not say when the Board of Mayor and Aldermen would make a decision.

Flaggs said after the meeting he designated Ward 1 Alderman Michael Mayfield to recommend the board’s decision on the issue.

“I informed the city attorney to inform the aldermen that it’s in Mayfield’s district and I want him to lead off and tell us which direction we want to go,” Flaggs said.

Mayfield said he planned to examine the rezoning issue, adding, “Anytime you talk about rezoning, you have to be sure you do your homework.”

“I need to know for myself what I’m talking about if I’m being asked to rezone an area,” Mayfield added. “You definitely want to take into account what the citizens who live around it have to say; you can’t ignore that because they’re the ones who have to live with the good or the bad that comes from this.

“We just have to take it one step at a time. When I make a decision for or against it I’ll know I did the right thing by doing my homework.”

Teller said Singh owns a convenience store that sells beer across the street from the site of the proposed liquor store/laundromat, which he said in the past served as a reception venue where liquor was served.

“It’s not all a stretch to be asking to be able to sell alcoholic beverages from this location,” Teller said.

He said there were businesses along Halls Ferry Road in Marcus Bottom operating in C-4 commercial zones, citing an auto repair shop and a detail shop not far from 2600 Halls Ferry.

“Moving down (Halls Ferry) you’ve got a beauty salon, another automotive repair shop in the 2600 block and you’ve got a fish market and the convenience store Mr. Singh operates,” Teller said, adding some commercial areas had variances to operate in the area.

“My point with all this is you’ve got commercial change happening regularly down there over time since the ’70s. You’ve got a nightclub down there, as I recall,” he said. “This corridor clearly is a major thoroughfare (and) has commercial property coming and going.”

Jim Sturgis Jr., who lives on James E. Sturgis Sr. Street, said he was opposed to the zoning change.

Cherry Street resident Jack Burrell said there is no C-3 property adjacent to 2600 Halls Ferry and was concerned about 18-wheelers delivering liquor to the store.

Concerning the C-4 zoning, Burrell said the C-4 zones did not indicate a recent change in the neighborhood.

“It is not becoming commercial,” he said. “Halls Ferry Road is a major thoroughfare and there are churches and a school in the neighborhood.”

Burrell said he was also concerned about the consequences of changing the zone to C-3.

“I’m concerned whether a different owner (of the building) would be a good neighbor,” Burrell said.