Vikings go on the road to face Germantown 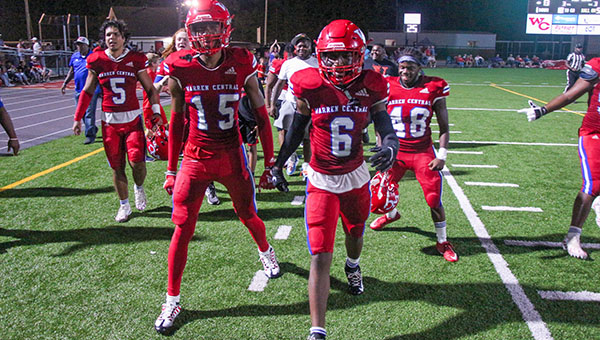 Warren Central football players, including Garrett Orgas (15) and Zack Evans (6), celebrate after Evans scored a touchdown in the third quarter against Vicksburg High last week. The Vikings will go on the road this Friday to take on Germantown. (Walter Frazier/For The Vicksburg Post)

Coming into the season, two of the biggest areas of concern for Warren Central were its defense and offensive line. Both units had a slew of new starters, and some growing pains were anticipated as they grew into new roles.

Warren Central’s defense has allowed less than 300 total yards in its first two games. The offensive line helped generate 250 rushing yards in one win and 20 points in another. Their rapid growth has allowed the Vikings to storm out of the gate to a 2-0 start, with a chance to finish the non-region schedule undefeated by beating Germantown this week. Kickoff is Friday at 7:30 p.m. at Germantown.

“I think we’ve made improvement. We’ve gotten better and learned a lot, which is what you want to see especially early on,” WC coach Josh Morgan said. “We’ve been fortunate enough to win along with fixing mistakes and things we’ve got to shore up. We’re slowly but surely becoming that team that has an identity. We’re close to playing a good brand of winning football.”

The Vikings held Vicksburg to 167 total yards, and had to claw out the win after the Gators scored on a 54-yard pass with 29 seconds left. Warren Central stuffed a two-point conversion attempt to secure its 20-18 victory. Having to play well all night, and then dig deep at the end, was a key test for a growing team.

The defense, in particular, turned in the latest in a string of strong performances. The Vikings did not allow an offensive touchdown in the opener against Forest Hill, and shut out defending MHSAA Class 6A champion Madison Central for two quarters in a preseason jamboree.

“Defensively, they’ve put out three really good performances going back to the jamboree. I’m pleased with them,” Morgan said. “But, again, we all know what’s coming and you can’t spend a lot of time patting yourself on the back. We just have to get better and keep improving, and coaching them up and setting them up for success.”

Germantown will not be a pushover, either. The Mavericks have started 2-0, have a talented defense and are getting some statewide buzz as one of the more improved teams in Class 6A.

“They’re doing some new things offensively. I think they’re playing really hard, and doing a good job minimizing mistakes,” Morgan said. “It’s that recipe everyone is after of taking care of the football, and not beating yourself with penalties and mistakes, and they’re doing a good job with that.”

This is the last of three non-region games for Warren Central. It has an open date next week, then begins the Region 3-6A slate with back-to-back games against Oak Grove and Brandon — the two teams that played for the South State championship last year.

Heading into the bye week, and the most difficult part of their region schedule, with a win and some positive momentum is important for the Vikings, Morgan said.

“Momentum is important. But the name of the game is winning. This is our next one, and it’s just as important,” Morgan said. “We want to keep growing, and continue to improve, and beat a good Germantown team and ride that momentum into our district. It’s a long journey and this is just the next step.”