Hurricanes storm past Southern Miss with big second half 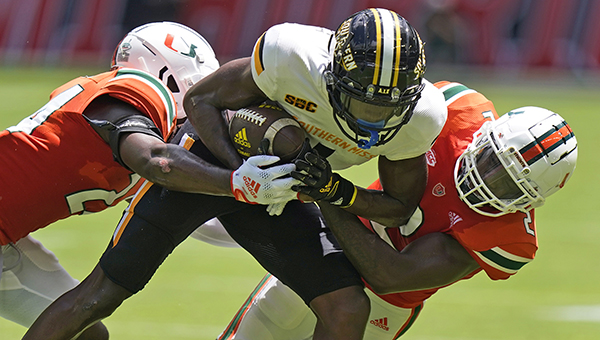 A pair of third-quarter touchdowns — barely two minutes apart — changed the game, Henry Parrish rushed for 102 yards and a score, and No. 15 Miami pulled away in the second half to beat Southern Miss 30-7 on Saturday.

The Hurricanes (2-0) trailed for most of the second quarter, then shook off the slow start by scoring the game’s final 27 points.

“I think it’s a good thing, actually,” said Miami quarterback Tyler Van Dyke, who completed 19 of 29 passes for 230 yards, a touchdown and an interception. “Obviously, we want to move the ball with ease … but I think adversity, we needed that for the rest of the season, just to experience that a little.”

Thaddius Franklin Jr. rushed in from 7 yards out for a 17-7 third-quarter lead, Van Dyke connected with Key’Shawn Smith for a 35-yard flea-flicker touchdown on Miami’s next offensive snap, and the outcome wasn’t in doubt again.

Parrish had a 1-yard touchdown run late in the first half for the Hurricanes, who have started with two wins for only the seventh time in the past 18 seasons.

Jason Brownlee caught a 32-yard touchdown pass from Zach Wilcke for Southern Miss (0-2). That capped a six-play, 75-yard drive for the Golden Eagles — but they managed only 122 yards on their next seven drives, five of which ended in punts, one with an interception in the end zone and the other with a fumble.

“We came out here to win the game,” Southern Miss coach Will Hall said. “Credit to Mario and his guys. Man, I’ve got great respect for him and a lot of the guys on their staff for making the adjustments to win the game. I thought they wore on us as the game went on.”

Frank Gore Jr., the son of Miami Hall of Famer Frank Gore, was held largely in check by the Hurricanes’ defense in his return to his hometown. Gore Jr. had seven carries for 10 yards, and two catches for 18 more yards. That’s after he rushed for 178 yards last week in Southern Miss’ opening-game loss to Liberty.

Wilcke, a true freshman making his first start, completed 16 of 27 passes for 207 yards for the Golden Eagles. Brownlee had five of those catches for 102 yards.