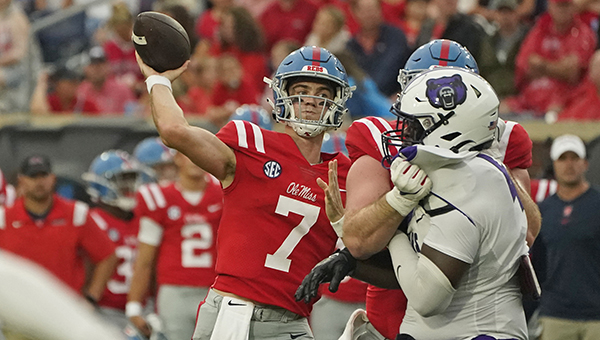 “We knew going in that their defense is really, really good,” Brown said. “They were. I can’t wait to watch them (Ole Miss defense) the rest of the year.”

Ole Miss forced four turnovers, recorded three sacks, and did not allow Central Arkansas to cross midfield until late in the first half. However, it was a fast offensive start and decisive special teams that settled the issue quickly.

Luke Altmyer threw two touchdown passes and ran for another score, and Michael Trigg had three touchdown receptions as Ole Miss (2-0) raced to a 28-0 first-quarter lead. Altmyer threw scoring passes of 1 and 7 yards to Trigg before adding a 1-yard touchdown run to cap the decisive surge.

Altmyer was 6-of-13 for 90 yards before being lifted late in the second quarter with what a school spokesperson described as an upper-body injury, pending evaluation.

“Luke was doing a good job until he got banged up,” Ole Miss coach Lane Kiffin said. “That affected him staying out there when he was injured. Overall, there was improvement from last week but we’ve still got to get better.”

The early outburst opened with a 6-yard touchdown run from Zach Evans.

Ole Miss got a 25-yard punt return for a touchdown from Ladarius Tennyson after a poor snap, and set up another score when Bobo Miller blocked a punt.

Atlantic Sun Conference member Central Arkansas (0-2) trailed 31-0 at halftime. It had 182 yards of total offense. Hayden Ray made a 31-yard field goal in the fourth quarter to avoid the shutout.

“It snowballed early with the two blunders in punting,” Brown said. “We knew it would be uphill against a great program and that put us behind the eight-ball.”

Ole Miss finished with 487 yards of total offense. Quinshon Judkins rushed for 104 yards as the Rebels pulled away, leading 52-0 after three periods. The Rebels improved to 10 of 11 in the red zone for the season, all touchdowns, after going 6-of-7 Saturday.

Jaxson Dart, a transfer from Southern California, relieved Altmyer and finished 10-of-15 passing for 182 yards, highlighted by touchdown passes of 6 yards to Malik Heath and 2 yards to Trigg.

Dart started last week’s opener against Troy, a 28-10 win. Altmyer got the nod against Central Arkansas as the Rebels’ quarterback competition will continue into next week’s road game at Georgia Tech — pending the status of Altmyer’s injury.

“Jaxson did some good things when he got in there,” Kiffin said. “He had some good series, a bad series, then came back with more good series. It was a cleaner second half, but not perfect.”